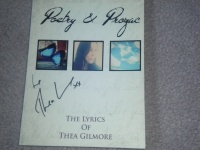 It’s a brilliant feeling when you come across a “tell-all-your-friends” band or singer – an artist so good, you want to tell everyone you know about them. You want to stop random passers-by in the street and say “Listen! For God’s sake, listen! Is this not everything you never knew you wanted from music?!”

They don’t come around that often – or maybe I’m just really hard to please, I don’t know. Currently, I can think of two – Brontide, and Thea Gilmore. Fortunately for you, I’m not going to bang on about Brontide again – how I feel about them and their dapper drummer is well-documented. No, this time it’s all about the Gilmore girl, and how she pretty much is my taste in music.

Hard to label – she’s a bit folky (without the rolling hills and fair maidens), fairly acoustic, rocky in places (there’s a definite Chrissie Hynde/Debbie Harry swagger there) – she’s the one artist whose career I will follow to the bitter end. I saw her live – for what must be at least the eighth time – at Union Chapel in Islington on Wednesday night. Which, by the way, is a gorgeous venue that if you get the chance to go to, you should. Sitting on a pew with my best friend and fellow Gilmore devotee, it occurred to me that I first heard of Thea nearly ten years ago. Which made me feel old – but not as old as I feel now, as I’m reading the Wikipedia entry for the UK charts of that year – 2003. The year of tATu (the snogging Russians). The year of Justin Timberlake’s Cry Me A River, of Evanescence’s first assault on our ears, and of Where Is The Love? Yeah.

The flipside to this “everyone must listen to this! Everyone!” feeling is that you lose that feeling of possession. Sometimes a band are so good, you almost don’t want others to know. There is immense joy to be had in the selfishness of revelling in something no-one else knows about. You can smugly congratulate yourself on your own exquisite taste.

Fortunately for me, Thea Gilmore fulfils both of these things – she’s so good, I want her to be compulsory listening for anyone who claims they have good taste in music. Far too clever to be lumped into the “female singer/songwriter” category, she ain’t no Alanis Morrisette. She’s also not exactly “famous”. Say to most people, “I’m going to see Thea Gilmore tonight”, and they’ll say “Who?” On the one hand, it’s kind of a shame that someone with such talent, who writes such fiercely intelligent songs yet never over-complicates her music, isn’t more well-known, but on the other hand, it makes her the best musical secret weapon we have. When the rest of the world realises what we did by giving them Ed Sheeran, we can say “Don’t shoot! We do have good music here, promise! The Clash and the Stones weren’t just flukes!”

Here’s a couple of Thea songs to get you started. If you like what you hear, I’d recommend her most recent album, Murphy’s Heart (2010), and Rules For Jokers (2001). If you don’t, well, I’m afraid you’re just wrong.

On the subject of me telling you what’s cool, if you happen to be at a loose end and are in/near London, please try and see the Veolia Environnement Wildlife Photographer of the Year exhibition.  It’s on at the Natural History Museum, and is around £10 entry (there’s probably a student rate, and I’m still not used to the fact that this doesn’t apply to me anymore. I just don’t feel like a real human being yet). It’s become a bit of a thing for the Boy and I, as it’s on in Bristol too, and we always come out afterwards going “right, let’s sod this real-life business, and just get cameras and go travelling”. This year, there’s fluffy ravens, comical penguins, breathtaking landscapes and a haunting photo of a tethered baby baboon with fear in its eyes that will make you wonder whether we really have a grip on what we’re doing to this planet of ours.

I’m going to leave you with a very classy, non-Thea song:

Went on a Big Walk. Someone rolled in sheep dung but still got a doggy ice cream at the pub.
A man, a dog, and an excellent t-shirt.
St Ives. Sun, sea, and Hepworth.
Mevagissey and a sea swim (finally!) at Pentewan. Water colder than Brighton, but glorious all the same.
%d bloggers like this: