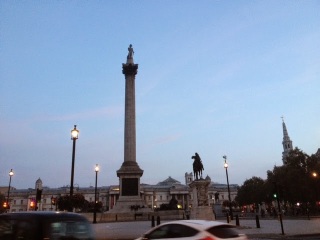 It’s kind of tricky to admit, but I know I can be pretty selfish at times. Certainly no more so than the average twenty-something – I hope – though I do have an aversion to sharing food and drink that borders on the psychopathic. And to make that worse, I am That Girl – the one that won’t order her own chips/onion rings/pudding, but will absolutely expect you to share yours with me. I’m sorry. I’m working on it (I’m not).

On Saturday, however, I did a small, reasonably selfless thing – I volunteered at the Cancer Research UK Shine Night Walk. Which meant I chose to spend my Saturday night standing at a pedestrian crossing in Trafalgar Square, from 11.30pm to 7.30am, making sure 16,000 walkers went in the right direction and didn’t get run over (I was at about mile 18; it would have been a terrible waste to get mown down at that point). It was, all things considered, a complete and utter blast.

The reason I decided to do it wasn’t because I now work for CRUK (though I do enjoy it; but mainly I just like being employed). It was actually because of a wonderful friend of mine, who was walking the walk, in memory of her mother. This friend has been through a fair amount by anyone’s standards, and is still one of the loveliest, kindest, most thoughtful and fun people I’ve ever met. It was kind of a solidarity thing – I thought, if she’s going to be walking 26 miles through the night, the least I can do is help out for a bit. So I did.

And what a night it turned out to be. When I arrived at my designated station, I wasn’t in the best mood – I was already getting the first wave of tiredness, the one that makes you think wistfully of sinking into bed. And the station manager was the most Scottish woman I’ve ever met, and she was so loud and enthusiastic that I’m sure she was an American cheerleader in a past life. At 10.30, this was not what I wanted. At 6am, when I had my next proper encounter with her, it was actually exactly what I needed.

I was partnered with Steve – “what a guy!” said Mrs Cheerleader, and they were not the words I would have used to describe Steve – and we were walked to Trafalgar Square and put in our spots. The only memorable thing about Steve was what he said after giving me one solitary fruit pastille: “your sugar levels will probably crash after that”. Steve, dude. I’ve weathered exam seasons fuelled by Haribo Tangfastics, coffee and Mini-Eggs. My tolerance for sugar is second to none. One fruit pastille’s just a drop in the saccharine ocean.

So then it was just a case of standing there, in a snazzy high-vis t-shirt and hat, feeling like a lemon – and looking like one, incidentally. The first walkers came by about an hour later, but stormed past like they were in a Liam Neeson film and were on a mission to fuck shit up. And then I waited another hour, and more walkers started to appear. But of course, this was London on a Saturday night, so while I was waiting on Shine walkers, I provided the tipsy revellers of Trafalgar Square with much amusement. “Why are you all in yellow? Do you have to stand there all night? What charity is this for? What are you DOING?” Most people were lovely, and simply curious, but I did acquire a creepy “friend” for a while – he wouldn’t leave me alone, and then would wander off for a while, but return ten minutes later and ask if he could stand there all night. Eventually, he realised he’d lost his phone at some point, and I put on my best bossy voice and said “I really think you should go and find it”, and he left.

“Have they even offered you a cup of tea?”
I replied that they hadn’t.
“I’m going to buy you a coffee!”
“No, don’t be silly. And I don’t have any change, anyway.”
“No, it’s fine.” And off he stumbled.
I decided that, given the state he was in, I’d be surprised if I actually got that coffee. And I later found out that he had tried to offer it to Steve, who’d helpfully directed him back to me. I don’t think I’ve ever enjoyed a 4am latte more. The price for this was having him stand there, shouting “encouragement” (“come on ladies, only six miles to go!” “Erm, there’s men there too, and it’s eight miles. You can’t tell them it’s only six!”) and every so often having him try and call his friend to get him to “come to the bright yellow lady!”

So if anyone knows a London-based, half-Finnish journalist called Eric, can you tell him that the bright yellow girl says thanks for the coffee? Cheers.

The night wasn’t without its low points – the main one being at about 5.30, when I realised I hadn’t seen the tea-coffee-and-loo van at all, and to be honest, quite needed it. I flagged down one of the the volunteer cyclists who were patrolling the route, and he hared off to find it. It was at this moment that a passing French guy chose to ask me about the event. I was almost bent double, as my back was really starting to hurt from the hours of standing, and also my kidneys were beginning to feel like they might explode. “What is this?” he asked. I couldn’t be bothered to simplify the explanation, so went with “it’s a Cancer Research UK walking marathon”.

“Cancer?” he said, with a look of concern in his eyes, and I nodded, and went back to crouching down, trying to ease the pain in my lower spine. So now there’s probably a French guy who thinks I have something terribly wrong with me. Sorry.

But then Mrs Cheerleader arrived to pull me and Steve from our positions, and give us tea and biscuits and a sit-down, and her sheer pep was just the thing to get us through the last hour or so.

And watching the sun rise in the Square was possibly one of the most beautiful things I’ve seen in ages – the sky lightened slowly, gently, and the morning was crisp and clear and pale blue and gold. The best kind of day. There was hardly anyone around by this point, except event staff and street cleaners – peace at last. At the end of the shift, I walked back down the Mall, towards Victoria Station, and wished I could stay up all night in London more often, so I could see things like this: 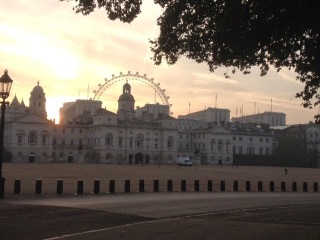 It was such a great event, and all of the Shiners were truly amazing – so positive, right the way through the night. Good on you, every single one. You were fantastic.

I might have to actually walk it next year.

Went on a Big Walk. Someone rolled in sheep dung but still got a doggy ice cream at the pub.
A man, a dog, and an excellent t-shirt.
St Ives. Sun, sea, and Hepworth.
Mevagissey and a sea swim (finally!) at Pentewan. Water colder than Brighton, but glorious all the same.
%d bloggers like this: