There are two kinds of people in this world: those who can’t sit still, and those who love nothing more than sitting still. I am firmly in the latter camp. All my favourite things involve sitting down: reading, writing, eating cheese, drinking a wide variety of alcoholic beverages, watching The Thick Of It or Parks and Rec with DB and occasionally nudging him with my head in the manner of a needy kitten, so that he puts his arm around me… where was I? Oh yes.

I forced myself to start running about two years ago, having decided that I needed to get into the swing of taking regular exercise before I hit my late twenties (I’m told that’s when it suddenly gets a lot harder to get away with a serious cheese and beer habit). And to be fair, it’s totally worked. I eat like the Very Hungry Caterpillar, but so far, I am in fact getting away with it. If ever there was a good reason to exercise, “you can eat loads and not go up a jeans size” is right up there.

I’m running my first 10k at the beginning of July, for charity – but also for me. When I signed up, I seriously doubted I’d be able to do it. “How am I going to have time to train, and work, and write, and work on my moving-to-Bristol plan, and still have a tiny sliver of a social life?” I asked Drummer Boy. “By being really organised?” he replied, and while I muttered something about that being incredibly rich coming from him, I knew he was right.

Since then, I’ve discovered that actually, 10k isn’t very much at all, and once you can do 5k, you might as well double it. I’ve also discovered some other stuff, some of it strictly running-related, some of it not…

1) The idea of it is far, far worse than actually doing it. Seriously, the hardest bit is actually getting out the door. Once you’re out there, anything could happen, but you’re already ahead of everyone else that hasn’t made it outside. You’ve already won, in a way. And so many things in life are like this – the idea of them is far worse than the reality.

2) When it hurts, it’s simply a case of continuing to put one foot in front of the other. Again, finding this out is really helpful – when you’ve cocked things up in a mighty fashion, the only way to plough through them is to keep going, one tiny, manageable bit at a time. My MA dissertation tutor tried to tell me this several times, while offering me a box of tissues and undoubtedly wondering why students are so bloody melodramatic – “don’t look at it as one big piece of work, look at it as quite a few small sections”. (I mean really, what I wouldn’t give now for my biggest problem to be ‘having total freedom to write a 20,000-word Thing, using books and journal articles for inspiration and guidance’.)

3) You need good fuel. Turns out, peanut butter from the jar isn’t a great pre-run snack. Why I had to find this out through bitter experience is anyone’s guess, but I hadn’t eaten a proper lunch, and was worried that running on an empty stomach would result in a poor run. You know what else results in a poor run? Horrible stomach cramps.

4) Sometimes you need specialist equipment. Not being blessed in the chest department, I shunned the idea of a sports bra for a while. Then, in a sudden moment of panic, I bought one. The first time I wore it, it was like being encased in an elastic band, and while my boobs were suitably restricted, so was my ribcage. Which is a pain, what with the trying to breathe and stuff. But Sports Bra and I are now firm friends, and when it goes on, I feel like I’m about to go on a Serious Mission to Fuck Shit Up. I’m Liam Neeson, but with messier hair.

It’s not such a happy ending where running tights are involved. Tight is the word – the first and only time I wore them, it was like being sawn in half, slowly, with a bit of lycra. I’m sticking to ratty leggings until I stumble upon something better.

5) Your body is clever, so be nice to it. I’m in the process of honing the kind of thighs you need to be friends with Beyonce (3:40 onwards, I think), and while they may not look dainty when I swing them out of bed in the morning, they’re strong. DB prodded me in the leg a while ago – don’t ask me why, it’s how he shows affection – and commented, “Jesus, your legs are rock-hard”. (I know, I know – sexy, right?)

I also read somewhere that if you start running with poor posture and technique, your body will self-correct the more you do it. That’s pretty smart – it won’t let you keep doing something that’s going to hurt.

A curious thing that’s not clever as such, more really annoying, is that if I go for a run in the days leading up to what I like to call the uterine Red Wedding, it brings on such ferocious cramps that I’ve nearly thrown up on the pavement. They last about ten minutes, and the relief when they pass is so biblical, it’s almost worth it. But not quite. Odd one. Being a woman is ace.

6) You can become the thing you think you’re not. “I’m not a runner,” I used to think. “I’m not the type of person that runs”. And now I am, and insufferably smug about it too, thanks very much. The only way you can change yourself is just by giving it a go. At least three times, just to make sure. By the time you’ve tried the new thing a handful of times, you’ve basically made it a habit – hey presto, you’re a runner.

7) You have to become your own cheerleader. It’s very easy to beat yourself up when you start running, because it’s hard work – “you can’t do this, you’re not fit enough, what on earth do you think you’re trying to achieve here, you great lumbering lump?” That doesn’t work. Paying attention to that particular voice in your head will only result in discouragement and misery. You have to be kind to yourself – patient, encouraging, supportive. If you wouldn’t say it to a friend, don’t say it to yourself.

This extends to the rest of life because you really do have to look after yourself. Parents, friends, lovers – they might get it wrong. Tell you the wrong thing, say something tactless that makes you wonder what the point is – of trying anything new, of changing the way you do things. Learning to cheer yourself on and let yourself of the hook when things go a bit tits-up is really useful.

What I also find useful is, when running, to imagine hordes of hot men cheering me on. The image of Tom Hardy shouting encouragement (in a brooding sort of way, obvs) as I pound along pavements is tremendously motivating.

8) The right soundtrack will get you through. My music taste is essentially “girls with guitars”, but when it comes to running, I need something different. I turn to the eighties, for power ballads and rock anthems, and Eminem, for ‘Lose Yourself’. It’s hard to run badly when “success is my only motherfucking option, failure’s not” is ringing in your ears (having thought about it, that’s kind of a tautology, isn’t it? Oh, never mind).

9) Those wanky hardcore runner types (WHRTs) who go on about it being almost meditative – “yah, I can really switch off, you know? I’m just in the zone” – aren’t totally barking up the wrong tree after all. It sort of is. When you spend the whole day dealing with other people – bosses, colleagues, family, friends – it’s actually quite freeing to take yourself off for a run. It’s just you and your legs,  you and your heart, you and your own thoughts – no-one else can get in on this. It’s yours. 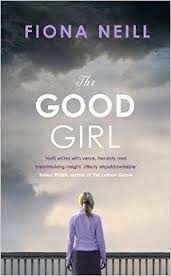 I finished Fiona Neill’s The Good Girl last night, and I hate to say it, but I’m quite baffled at all the good reviews this book got. The plot itself is strong – teenage girl makes an explicit video that goes viral, while parents’ marriage splinters but doesn’t quite break, and all manner of secrets come out, or don’t – but I’m amazed no-one’s picked up on the frankly unbelievable characters or the clunky dialogue.

It’s such a shame, because it’s an ambitious novel, and the way Neill chooses to reveal how events play out is really well-executed, but sitting there going “but people don’t talk like that!” and “Jesus, has this person ever met a teenager? They have never been, nor will they ever be this articulate and wise” is quite distracting. It bothers me, because I have a pet theory that if you’re a writer, you should read everything you write out loud. If it sounds awkward when you say it, it’s going to sound awkward when someone else reads it. It won’t flow, basically. FYI, I read all my blog posts out loud until I can pretty much deliver them like speeches – albeit the kind of speeches that get made in pubs at last orders, or at friends’ kitchen tables after a good half-bottle of wine each.

I’m going to shut up now, I think. This is a good song.