I didn’t start this blog so I could use it to complain about my life (no, really). I mean, yes, I do a fair bit of complaining here, but I either try and make it relatable, or, if it’s personal, do it with a sense of humour and a hefty dose of self-awareness. (Life tip: make jokes at your own expense before anyone else has a chance.)

But God, this week’s been a bit of a shocker. I won’t go into details, because it would be very tedious – and if you work and/drink with me, you’ve probably already heard – but in short, there’s been at least two work-related disappointments, many flat-hunting setbacks, and lots of arguing and crying. I have a pathetically low tolerance for stress at the best of times, being rather feeble and easily panicked, so I’m glad this Terrible Week is nearly over.

I’m no Pollyanna; it’s hard, when nothing seems to be going as planned, to not take it very, very personally. It’s also a shame, when you have a job, qualifications, a functioning relationship (by the skin of its teeth, anyway), and a bunch of good friends, to still feel like something of a failure. No, I’m not doing quite what I want to be doing, career-wise. No, I’m not earning as much as I’d like. No, I don’t have my own place. The best I can do right now is stick a “yet” at the end of those sentences, and resolve to keep on keeping on.

So, in the interests of this post having at least some redeeming qualities – and not simply being, as a dear friend said the other day, “just a wank on the page”, here’s how to get through your own Truly Terrible Weeks.

In tearful times, there’s a lot to be said for the great British tradition of a nice cup of tea. Ideally, it should be made by a love interest – all other romantic gestures are trumped by a well-timed, unasked-for cup of tea. They just are.

In sleepless times, you need to up your caffeine game and hit the coffee. If you’re ploughing through a tough day/week/year at the office, and trying to do it while sleep-deprived, you’re going to need good, strong coffee.

2) Talk to your calmest, most interesting friends. One of the week’s few bright spots was having a long chat with one such friend about everything from growing tomatoes to Go Set a Watchman. It was soothing – as long as I didn’t focus on the fact that he was due to leave for Japan within 48 hours and I probably wouldn’t be seeing him again for well over a year.

3) Remind yourself of, and keep chanting, all the motivational quotes and sayings you can think of. Make your own up if you have too. You’ll feel like a walking tumblr, but it will help. Useful ones are as follows:

“For every thirteen no’s you hear, the fourteenth answer will be a yes”.

“There will always be someone else who fucked up worse, and managed to turn it around” – I don’t think this is a common saying, but it should be.

And two old favourites: “it could be worse” and “onwards and upwards”.

(You have to believe this nonsense otherwise you’ll go crackers or jump off a bridge.)

4) Don’t hate-stalk. We all have those Facebook/Twitter/Instagram friends who are achingly smug, and sadly have much to be smug about, so don’t do it to yourself. You’ll only end up hissing things like “she’s 25, how the bloody fuck can she afford a cleaner?” to yourself, at 2am.

5) It’s sod’s law that the day you receive bad news is the day someone in your social circle gets a promotion/engaged/baby/frankly obscene payrise. Smile, nod, congratulate through gritted teeth, and take a large gulp of gin.

6) Gin. Wine. Beer. Pick your poison, have a couple of glasses. Any more than a couple and you stand a good chance of weeping yourself hoarse, or restarting a really old fight. Neither of which will make you feel any better, despite what ‘drunk brain’ may be telling you.

7) Remember who’s on your side. And remember too that anyone who gives you advice or criticism is doing it from only one place, one perspective – their own. Parents and grandparents grew up in different times and different circumstances, which will have formed and shaped their opinions and outlooks.

8) You are not obliged to let the bastards get you down. You are allowed to say “sod it, I’m going to enjoy my evening and worry about this tomorrow”. If it gets to Friday, and it’s sunny, and you’re in good health and not alone in the world and still have some money in the bank, then put your face on and get yourself a drink.

9) Shut Up and Dance. The day that massive, camp, super-poppy choruses like this fail to cheer me up is the day I walk into a lake, to be honest with you. Being someone’s “discotheque Juliet teenage dream” sounds like a shedload of fun, too, where do you think one would apply for such a position? 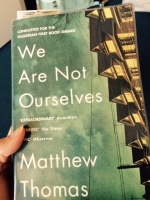 Normally, I’d give books that run to 600 pages a wide berth – being of the opinion that if a writer can’t finish a story in less than 400 pages, they’re just showing off all the words they know as opposed to actually dishing out a plot – but something about this one made me want to give it a go. And I’m so glad it came home from the library with me. Part family saga, part forensic examination of a marriage, part something else entirely, it’s incredibly well-written (no overblown, flowery prose here), and quietly addictive. It doesn’t feel like an Epic Novel, even though it’s been hailed as one. I can definitely recommend.