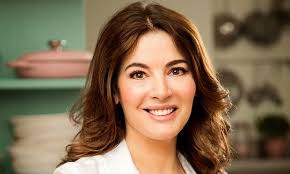 Nigella Lawson is one of those celebrities – like Davina McCall, Kirstie Allsopp and Kate Moss – who utterly divides opinion. People who like her love her, and people who don’t groan whenever her name is mentioned and go “oh God, I can’t stand her”. I am firmly in the former camp. I adore her. I’ve never met her, but I love her. I’m so glad she’s back on our screens again, with her beautiful, improbably-immaculate kitchen, her ludicrous love of alliterative adjectives (it’s catching), and of course, her cooking.

For someone who’s not got rid of any book she’s acquired, ever, I’m fairly certain I don’t own a cookbook (I must do. Somewhere in the five boxes of books in my parents’ garage) – but Nigella’s latest offering is top of my Christmas list. I had a flip through it in Waterstones the other day, and it’s gorgeous. It just looks beautiful. More importantly, though, the recipes look simple enough that a kitchen-phobe* such as myself could not only follow them, but enjoy doing so.

*I’ve never really enjoyed being in the kitchen, but I’m determined to overcome my culinary fears. I’m currently very distracted by an obsession with stewing fruit. I’m fairly certain stewed apple was the first solid food I ate, as it was something Granny always had on the go in her kitchen. The last couple of Sundays have seen me peeling and chopping fat Bramleys, chucking them in a saucepan with some suagr and water, and getting disproportionately excited as they lose their mouth-pinching sourness, and soften into foamy sweetness.

And that, for me, is most of her appeal. She makes it look so easy. She uses ready-made stock in recipes, things from jars and tins, and makes a point of not apologising for it. She cuts spring onions or bacon into pans with scissors. One of her recipes is basically pasta and Marmite, for goodness’ sake. Obviously, not all her recipes are so straightforward, but a lot of the time, it at least looks like she’s cooking real food for real people. People with jobs and families who get home from work and just need something they can assemble in a roasting tin, shove in the oven for a bit and then slide on to a plate.

Against the current trend for clean eating and gluten-free, dairy-free, sugar-free everything, she’s refreshingly ‘normal’ (no, I’m not dismissing the fact that a lot of people genuinely cannot eat gluten/dairy/whatever). She makes cakes with butter and eggs and cocoa and sometimes two kinds of sugar. If nothing else, it’s a lot easier to get hold of caster sugar than it is coconut sugar. That being said, last Monday’s episode of Simply Nigella did see her making some sort of breakfast bar using goji berries and flaxseed, much to my – and plenty of other viewers’, judging by my Twitter feed – horror, but I suppose even Nigella’s not above getting involved with the occasional food trend.

Ms Lawson is a tricky character for the handful of lovely feminist boys I’m happy to call friends – they find her a bit too contrived, with her sultry tones and finger-licking and the fact that she’s a woman choosing to be seen and filmed in a kitchen. I think Drummer Boy may have accused her of being rather unfeminist once or twice – “[her work] should be able to stand up on its own, without her using sexuality to sell it”. But that’s her thing, isn’t it? She knows it works – if it ain’t broke… And I don’t really agree with him that Nigella is essentially unfeminist – a woman who looks like she’s cooking and eating exactly what she damn well pleases looks pretty feminist to me.

If you need a slice of pure joy – and this evening, after this weekend, who doesn’t?  – have THIS.