We moved again, right before Christmas and ten days after writing off the car – we’re good at planning things. So for the next six months at least, home is on the fourth floor of an Art Deco building on the seafront. You open the front door of the block and you’re staring at the ghostly spider-skeleton of the West Pier. And the sea, of course, the sea. Our studio is to one side, overlooking a street filled with restaurants of every kind of cuisine you can think of, running the gamut of health and safety standards. It reminds me a little of DB’s flat in Bristol on the Whiteladies Road, where he lived in his last year of university, and where I fell in love with the city, and the boy (in that order, obviously). 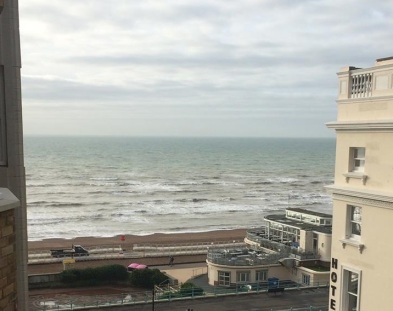 I spotted the flat online on a Wednesday lunchtime, and something about it forced me to pick up my phone, leg it into the office corridor and book a viewing there and then. Normally you have to pay me to conduct grown-up affairs on the phone. Literally pay me – the only time I’ll willingly ring a business or service-provider is at work, because it’s on behalf of someone else. I have no qualms about ringing any of the companies we deal with at our office and telling them coolly and calmly that they need to help us sort out a problem, but in my own life? Not a chance. But I knew from one brief scan of the photos that 1) this flat wasn’t going to stick around, and 2) if anything in life was certain, it was this: I had to see it before it got snapped up.

On the Thursday evening, the estate agent showed us another flat first – more expensive, worse location, with a bedroom the size of a shoebox and a treacherous flight of steps up to a tiny roof terrace, which would probably kill me if I tried to descend them after a glass of wine. Thanks, but no thanks. “I’ll show you the other place, but I think it’s gone. Are you sure you still want to see it?” Yes, I’m sure. I love a bit of self-torture.

It’s easily the nicest studio flat I’ve ever seen. There’s a proper separate kitchen (not the usual two-ring-hob-and-microwave-set up), and a bathroom – with a bath! – that wouldn’t look out of place in a reasonably-priced boutique hotel. The actual living space has bare floorboards, a bed set into an alcove, a set of vintage-style lockers, a wobbly little dining table, and various bits of furniture that don’t really match but give the place a sort-of-bohemian, sort-of-Art-Deco vibe (I wouldn’t be much use on an interiors magazine).

“So I think someone’s already made an offer, the landlady’s just deciding if she wants to take them on as a tenant. There may be a slight issue as I think the person’s a smoker, and she absolutely doesn’t want a smoker. Are either of you guys -?” We shook our heads violently. “Well, I can ring the office and see where we’re at, if you like?” We hovered in the kitchen, not wanting to hear bad news twice, and stood there whispering, “it’s really nice. It’s really nice. If it’s still available, could we take it? Could we afford it?”

“No. Go home and think about it. Our office closes at seven, so ring us before then and let me know if you’re interested. This will not hang around.” It was 6.30 by this point.

We knew from bitter experience that this was only partly estate-agent pressure. Studio flats don’t hang around in cities; nice ones like this go within hours.

At 6.50, we rang them. We were told that ideally we’d need a combined annual income of thirty times the monthly rent in order to be accepted. I have no idea how they arrive at these conditions. I work for a charity, he’s a musician – my maths isn’t great but I knew we might just fall short. We gave them our details, and waited.

Friday afternoon, my phone rang, I legged it out of the office once more. The place was ours.

A week before Christmas, my uncle helped me move our stuff in, as we were car-less by this point. And then we were both at home for Christmas, and spent a few days in the depths of Hampshire, so we didn’t settle in until around New Year.

On New Year’s Eve, we drank the bottle of Cava the landlady had left for us, and watched fireworks glitter the skies over Brighton. For the first time in a year, we have somewhere that feels very much like home.

One thought on “Home”

The category is… lead singer in a nineties indie-pop band.
It’s only taken me 31 years to find the time to visit Cornwall. I think I may have left a piece of my heart there.
In my (favourite) element.
Had a lovely time defending my afternoon tea from a marauding peacock. (Stole the pic from @emmamerriott )
Loading Comments...
%d bloggers like this: