First up: Parks and Recreation. Can I please talk about how brilliant Parks and Rec was? I know the vast majority of the Western world cottoned on to this years ago, but we only watched the final episode very recently and I miss Leslie so much.

Other things to love about Parks: Leslie and Anne’s friendship (the best portrayal of  female friendship on TV), Duke Silver, April and Andy’s constant support of one another, and the fact that like all the best, most thrilling relationships, Leslie and Ben started off borderline-hating each other.

Secondly: Left of the Middle. Remember Natalie Imbruglia? The genetically-blessed Neighbours actress who dodged the soap-star-turned-singer curse by actually being in possession of a decent voice, and who gave us the nineties smash hit Torn? Well, one morning this week I woke up with a track from her debut album in my head, and I know how these things go – the only way to shake an earworm is to give into it so totally you eventually bore it to death. So off I scuttled to iTunes (other music providers are available) to hunt down Left of the Middle, and in particular, these three tracks:

The title track isn’t half-bad, either.

I have an enduring theory that the music you get into when you first get into music – just before your teens, when the songs you love have the abillity to warm your very blood, and lyrics hit their emotional marks like arrows – stays with you. Your tastes may change, or simply broaden, but the ‘first’ music is like your first love. Nothing else will ever fire up your heart in quite the same way. The first music I fell in love with was the late nineties, early 2000s pop-rock, from the likes of Alanis Morrisette, Michelle Branch, Jewel, Tori Amos, and Natalie Imbruglia. And though my tastes have changed and expanded, I’ll always have a soft spot for angsty, guitar-playing female singer-songwriters.

Third: Jubilee Library, Brighton. I can officially call myself a resident of Brighton & Hove now I’ve joined the library. Where else is a book addict on charity wages supposed to go on a chilly grey Saturday afternoon? Happily, I found a copy of Stephen King’s On Writing, which I’ve been told to read many times, and which also leads me nicely to… 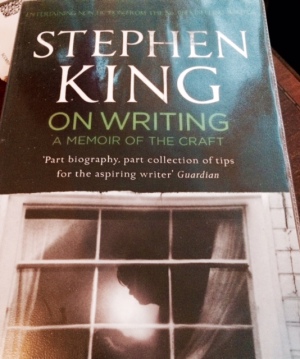 …number four: this blog post, by the excellent Emma Gannon. It sort of echoes Caitlin Moran’s ‘inappropriate advice for creatives’, which I’m sure I’ve linked to before but will link to again anyway, because if you’re pursuing a career in the arts, you should probably re-watch it once every eight weeks anyway. The first two minutes of her speech are particularly useful, and I have to admit that it’s taken me an embarrassingly long time to realise the truth in the statement “you cannot be too obsessed with what it is that you’re going to do for a career”. For writers, this means reading everything by writers you love, and then everything by writers they love, and then writers you don’t love. Taking this approach has got me from Terry Pratchett to Alan Coren via Neil Gaiman, and that’s just the start of it.

Five: Brunch at the Seven Stars, Ship St, Brighton. I dragged DB out into a drizzly, iron-grey morning so we could indulge our revoltingly middle-class tendencies by Instagramming plates of eggs and avocado and sourdough. Was it worth it? I feel the picture says it all: 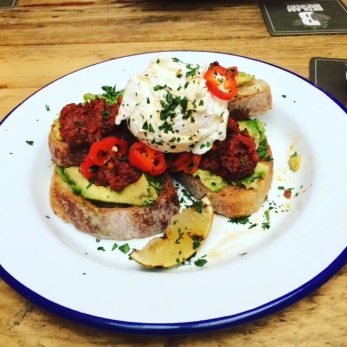 Six: here comes the beauty bit. Sorry, gentlemen, there will be little for you in the next paragraph, as I have little use for hair wax or beard oil. I can recommend American Crew Hair Pomade, on behalf of Drummer Boy – I bought some for him a while ago and rather gratifyingly, he’s not used anything else on his hair since then.

ANYWAY. Gather round, girls. My make-up buying habit is becoming a bit of a problem. I just like buying stuff I can put on my face to make it look nicer. Let’s be honest, there are worse vices to have. Of all y

our standard Boots-and-Superdrug make-up brands, Bourjois is probably my favourite – the packaging is lovely, their products tend to be good quality for the price point and their Rouge Edition Velvet lipsticks can withstand all the eating, drinking, fighting and making up again you care to throw at them. Believe me, I’ve tried. Today I returned to their CC cream, for a zero-effort Sunday face. It’s a rare day I’ll go make-up-free, but this stuff has enough coverage that you can just blob some on and not have to worry about bumping into an ex, while feeling no heavier than a moisturiser.

Seven: Nigella’s cauliflower and cashew curry, from her latest book. Made this on Monday night – one head of cauliflower will do two hearty portions, I’d say – and I can safely say it’s a winner. If you want the full recipe, let me know.