I used to be seriously anti V-Day. Initially because when the majority of my sixth form college friendship groups were trying out their first relationships, I was single, and so watching these newly-fledged couples celebrate on 14th February wasn’t much fun. It was like Christmas for people who’d found someone to put up with their shit, and feeling left out cuts like a knife when you’re 17.

And then, when I was in a relationship, it seemed achingly uncool to celebrate Valentine’s Day. Surely if you’re genuinely happy and fulfilled in your relationship, you don’t need a calendar-assigned day for romance? Especially when it’s the worst, most hackneyed version of romance – red roses, Ann Summers underwear, sickly sparkling rosé wine, an awkward dinner at a packed-out branch of ASK. It’s not real romance – which, incidentally, consists of unasked-for cups of tea, a shared love of cheese, and remembering the obscure reason I am nuts about the song LOVE by Nat King Cole. Valentine’s Day always looked to me like another excuse to show off on Facebook – photos of flowers, statuses of “I love my man #blessed” and the relentless smugness made me bored and nauseous and angry, not necessarily in that order. Smugness is not palatable when it’s unearned; it’s easy to be smug when you’ve only been together a few months – you’re like the couple in the Dylan Moran bit: “you’re amazing, and I’m amazing, isn’t it just amazing? I know this amazing bar – let’s go there, and make it better”. You haven’t fought over anything yet. You haven’t had to make an effort.

Nearly five years ago now, the single biggest stroke of luck that has ever or will ever present itself to me bowled across my path. I got drunk with a sort-of friend, who was funny and scathing in just the right way, a music nerd in a checked shirt with a mop of hair and a ridiculously posh voice. As a result of the drunkenness, I made out with him, on his face. And since then, we have fought like feuding Shakespeare characters over several things – most often, his career choice, and my preference for snark over calm, rational discussion, and once, the washing up of a chopping board. We have also tried our utmost to build a relationship on the best things – kindness, talking to each other about everything, endless tolerance, and humour. He is better than me when it comes to the first three of those things. Kinder, better at calm discussion, far more patient. We are equally funny though. We have lived together for over a year now and not killed each other and today, I reserve the right to crack open some Prosecco and say “you know what, we’re doing all right.”

This year, I think we need Valentine’s Day more than ever. Winter’s been here forever, it seems, and there’s so much bad news out there right now. We need to celebrate the things we do well. And love is one of them. Of all the inventions and ideas human beings have come up with, love’s one of the keepers. So if we are lucky enough to have someone in our lives – and for the most part it is dumb luck, don’t let anyone say otherwise – we should toast that. With the finest Champagne or supermarket Cava, doesn’t matter. Buy some flowers – pink is a cheering colour, and it’s nice to have a vase full of something pretty. Cook your favourite dinner – don’t go out, no-one needs to go out on Valentine’s Day. Stay in – in your space; get cosy in the little world that belongs only to you and your beau, or you and your friends, or just to you. You don’t have to be with someone; love is about accepting yourself as much as it is about accepting someone else. I don’t subscribe to the over-used Cosmo philosophy that ‘you can only love someone else when you love yourself’, though – who actually loves themselves? We tolerate, and grudgingly accept, and try to forgive ourselves, and that’s probably the best we can hope for. Love is perhaps pushing it.

It’s cold and dark and miserable out there – why not make today as lovely as possible?

The five cutest couples I can think of, real or fictional, off the top of my head:

Like all the best relationships, this one starts when he calls her “carrots!” and pulls her hair, and she responds by cracking her slate over his head. They then find themselves on a bitter path of academic one-upmanship (if I remember correctly, one week he tops their class, the next, she does, and so on and so forth) but right at the end of the first Anne book, it’s Gilbert who softens, and asks if they can be friends. Two books later, and they’re as good as married. I can’t think of a better relationship model than that.

My devoted girl-crush on Olivia Wilde is well-documented (so excited for Vinyl to start just so I can gaze at her face) and I think I have something of a couple-crush on her and Jason Sudeikis. They’re both so attractive and talented and always look properly in love when pictured together. I have watched the film Drinking Buddies several times and when Jason appears briefly as Wilde’s boss, you can see the chemistry, even though you’re not supposed to.

Leslie and Ben from Parks and Rec

The reason I adore these two is because they’re straight out of the Anne and Gilbert school of love – they start off hating each other. It doesn’t take too long (and all credit to the Parks writers for pacing it beautifully) before it’s painfully obvious that they like each other, and they go on to become one of the best TV couples ever. They’re supportive of each other, they make hard decisions together, and are consistently on each other’s side. You never doubt for a moment that they’re a totally solid team of two.

Very much a “but of course” couple. Both clever, self-deprecating and so very British (I mean in the way that the rest of the world finds endearing and charming, not in a UKIP way), they’re the poster couple for Radio 4 listeners and lovers of good knitwear. Again, I don’t mean that in a bad way. I’d love to be adopted by them, if only because I suspect their home is stuffed full of interesting books and good wine.

They’re also totally, surprisingly romantic about each other. In a 2013 interview, Victoria was quoted as saying: “he’s a hugely successful television comedian, he could have had a gorgeous 24-year-old skinny wife with a tiny nose and a string bikini, but he chose me! Me!  I am filled with this bizarre mix of thinking David could have done a lot better than me and feeling we’re so alike and complement each other so wonderfully that we are the ideal match and couldn’t possibly be with anyone else.”

David, not to be outdone on the smush front, wrote one of the most poignant things I think I’ve ever read about love in his memoir Back Story:

“…I asked her to marry me and she said yes. In fact, to my unsurpassable delight, she said ‘Of course.’ Of course we’re getting married. It’s obvious… The down side is the fear. The fear of something happening to her, the pressure of there being two bodies in the world that I want to keep from harm and only being able to watchfully inhabit one of them.” 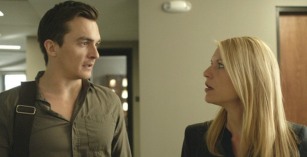 These two don’t really count as “cute”, but Drummer Boy insisted they make the cut, for being “completely badass”. I agree wholeheartedly, but given how the last season of Homeland ended (SPOILER ALERT SO DON’T SAY YOU WEREN’T WARNED: Quinn’s gone to party with Bowie and Rickman in the great green room in the sky, right?), I feel Carrie and Quinn as a couple exist mainly in our imaginations. They did have some great moments though – there was that time he shot her, and the time he had to stop her ordering a drone strike on Saul. But there was also the time Quinn was shown holding Carrie’s daughter Frannie, which was one for the ovaries.

In the words of Phil from Modern Family (he and Claire nearly made the list):