It would have been the Sunday Seven but I had a filthy cold all weekend and so forming coherent thoughts through the snot and sinus pain was a little difficult. Never work in an office, they’re full of people, and people have germs. 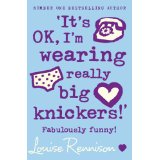 The news came this afternoon that Louise Rennison had died – and the first thing I did was send a message to one of my secondary school best friends to tell her, because we both loved her books and could quote bits verbatim, and often did. Twitter lit up like Christmas as it does when someone dies – firstly with all the funniest and best female writers quoting their favourite Georgia Nicolson sayings, and then with all the teenage girls. And the former teenage girls. We devoured the fictional diaries of a ‘normal’ girl and in her adolescent world-weariness, her wit, and her group of girlfriends – long live the Ace Gang – we saw ourselves.

Rennison absolutely nailed so many things about being that age – the nicknames you have for your friends, teachers and enemies. The boundless exasperation with your parents. The way crushes are everything – hard work and paralysing while also being tremendous fun. I have so much affection for the bits I remember from these books: Dave the Laugh, Wet Lindsay, Rosie and Sven, “I’m away laughing on a fast camel”.

Looking back now – especially as someone who mainly just wants to be reasonably funny in print – it was a revelation. A woman writing about the relatively uneventful life of a teenage girl and making it absolutely hysterical. 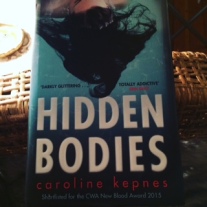 mpletely intoxicating. I was obsessed with it while I was reading it last summer and missed it, and its oddly charismatic, brilliantly self-aware stalker protagonist Joe, once I’d finished it. I want there to be a film – hell, I want to make the film, and be in it – and last week, I ploughed through the sequel Hidden Bodies. I don’t think I’ve been this excited about a book since the final Twilight one came out (shut up, I was… 18. Oh. Let’s move on).

I would say that Hidden Bodies is not quite as good as You (the plot laughs in the face of plausibility) but Joe’s voice – scathing and incisive and liable to skewer pop culture with poisonous one-liners – is the driving force here. I haven’t come across such a despicable yet compelling character since I read John Niven’s Kill Your Friends. Caroline Kepnes has created an incredibly strong character; he is both appalling and addictive. Since finishing Hidden Bodies I’ve bought and re-read You, because I can’t quite get enough of this smart, caustic, charming, murdering man. He’s really nice, until he isn’t. Honest.

This is a very book-heavy post, because next up is Stephen King’s On Writing. If you’re interested in writing and haven’t read it, you need to rectify that as soon as possible. The first part is half-memoir, half-writing wisdom; the second part is all writing wisdom – and pure gold it is too. What makes this book so important is three-fold: firstly, King’s generosity in writing it at all. He is literally telling you how to write. Stephen King, giving away the ‘secrets’, throwing open the magic circle of storytellers. Secondly: his love for the craft laces every single word. And thirdly – it’s all getting a bit meta here – he writes beautifully about writing.

Every so often, an album lands that gets you properly excited about albums again. In 2013, Lissie released Back To Forever and Sara Bareilles gave us The Blessed Unrest. In summer 2014, Brontide dropped Artery – which is an absolute stormer if slightly mathy, perfectly constructed post-rock is your thing – and at the end of the same year, we got 1989 by a certain Ms Swift. I brook no argument on that point; Swift is one of the slickest pop songwriters out there.

And now we have My Wild West, the third release from Elisabeth “Lissie” Maurus. Too often relegated to Radio 2 or overshadowed by a certain trio of Topshop models in need of haircuts (hi, HAIM!), Lissie is one of those unfairly underrated artists whose versatility is almost her undoing. Too rocky for the acoustic crowd and too mellow for the straight-up rockers, if Lissie had emerged in the early ’90s, with her Sheryl-Crow-meets-Stevie-Nicks voice and faultless songwriting ability, she’d have cleaned up.

The first couple of singles from My Wild West (‘Hero’ and ‘Don’t You Give Up On Me’) weren’t especially indicative of the album’s sound. They’re both slightly dreamy and poppy – DB thought they were both reminiscent of Lana Del Rey – and I did not have high hopes. My fears were unfounded though – there’s no shortage of swagger here. Personal favourites are ‘Wild West’ – a sing-along mission statement if ever there was one; ‘Daughters‘, a stormer of a feminist anthem, and ‘Shroud’, an ever-so-slightly Pixies-esque track which, with its refrain of “I feel like I have lost my mind”, I am claiming as my PMS theme song. 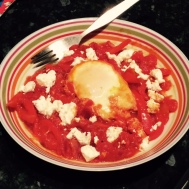 Shakshuka (that’s a really nice piece of writing as well as roughly the recipe I use). Eggs in purgatory. Eggs in hell. Whatever you want to call it, I’m addicted to it. It combines two of my favourite foodstuffs: spicy tomato sauce (I have a love of tomatoes hitherto unseen in anyone under 55/who doesn’t own a greenhouse), and eggs. Which are the quickest and most comforting of all the “I can’t be arsed” suppers. I love an egg. Poached if possible, scrambled if not, fried as a very last resort. I have to be suffering a particularly pernicious hangover to fancy a fried egg. ANYWAY. Basically, you make a tomato sauce – cumin seeds, bit of onion and garlic, some chili, thinly sliced peppers, a teaspoon of brown sugar, chopped tomatoes – and when that’s bubbled away for a while and is sweet, and spicy, and smells glorious, you crack an egg into it. Serve with snowy blobs of feta cheese and crusty bread for best results.

Out of Print is a lovely little company that produces literature-themed merchandise and for every product sold, a book is donated to a community in need. Drummer Boy gave me the To Kill A Mockingbird necklace as a birthday present – two small feathers on a chain, one with ‘Scout’ on it, one with ‘Boo’ – and when they had a sale recently, I bought the Wuthering Heights t-shirt. I’m not being a pretentious wanker – well, no more than usual – when I say it’s one of my favourite books; it really is. (And also Tom Hardy played Heathcliff in the ITV adaptation way back before anyone really knew who he was, so I like to think I fancied him first. Not quite sure what it is with me and essentially horrible fictional men, but never mind, we’ll leave that one for the future therapist.) 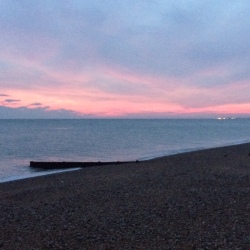 I’ve wanted to leave by the sea since I was little; I don’t know why, seeing as I don’t like being in it or eating things from it. There’s something strangely comforting about it – the colours and the height of the waves may change, but the tide is constant. And now I do live by it, and can see it from my window, and stare it in the face every morning when I step out of the front door, I forget how lucky I am. On Saturday evening there was a particularly lovely sunset, and it reminded me.