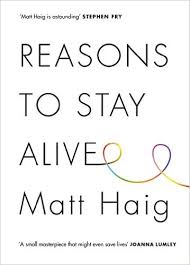 “Reasons to stay alive?” Drummer Boy peered at me with concern when he noticed what I was reading a few days ago. “Are you… OK? Anything we need to talk about?” With a rather emo title, and fairly weighty subject matter, you’d expect Reasons To Stay Alive by Brighton-based author Matt Haig to be rather heavy going, but it’s not. Yes, it tells the story of Haig’s experiences of depression and anxiety, but there’s a real lightness to it, and it’s incredibly readable. The format may not be for everyone, as it reads more like a depression journal than a piece of linear prose, but that gives it an immediacy – you can almost see Haig being struck by a thought, fumbling for a notebook and scribbling down the idea before it slips away. It’s been bothering the best-seller lists for months now, so if you’ve not read it, and/or you’re interested in mental health, I’d highly recommend it.

It drives me bonkers that there aren’t more events for non-fiction writers – why should fiction and poetry writers have all the fun? And yeah, yeah, I hear you, if I’m that fussed I should start my own, but unless we can meet every Wednesday on the 7.12 to Victoria, I’m not quite sure when it’s going to happen. ANYWAY. On a total whim, on Tuesday I popped along to a London Writers’ Club event, because I’d seen on Twitter that Emma Gannon was going to be there discussing memoir-writing. It was a fantastic evening, and so lovely to get to talk to other non-fic writers – bloggers, aspiring memoirists, the simply curious. Normally, at these sorts of things, I’m quite bad at doing the meet & greet, networky stuff. I get hit by an attack of nerves and can’t bring myself to talk to anyone, but I made myself have a chat to Emma and she was lovely, and highly encouraging, and I ended up firing questions at her for perhaps longer than she might have liked. It was just nice to be in a room where saying “I want to be a writer” doesn’t mark you out as an idealistic fool.

Still riding the high from the Writers’ Club event, two days later I went to Waterstones’ flagship store at Piccadilly to see one of my new favourite fictions writers, Caroline Kepnes, talk about her work. Author Cathy Rentzenbrink (whose work I’m not familiar with but I know The Last Act of Love is doing terribly well at the moment) was an excellent interviewer, and it was just so damn cool to hear the brains behind murdery charmer Joe Goldberg discuss her creation. Strangely, I’ve never been in the Piccadilly Waterstones, and it’s basically a booklover’s Versailles. I was in heaven. They also happen to provide free wine at these events – just, you know, FYI.

I’m embarrassingly late to Me Before You – friends have recommended it to me numerous times, and I’ve even had a stranger on a train urge me to read it (I asked her if she was enjoying A Spool of Blue Thread, as I’d read it fairly recently, and we got chatting about books, and she asked if I’d read “the one about the man in the wheelchair”. I knew exactly the book she meant before she’d even got the words out). Finding out that the film will be released in June (on mine and DB’s anniversary of all days; I’ve been told we won’t be seeing it as part of our celebrations) prompted me to pick up a copy. A rainy bank holiday was the perfect excuse to delve into it, and delve I did – finishing it a mere matter of hours after I started it. I read the final pages in a cafe – as the plumbing in the flat had decided to make a terrible continuous racket – and, well, reading this book in public is not a good idea. In fact, it’s an appalling idea, unless you like dabbing tears off your face with a scratchy napkin and determinedly not meeting anyone else’s eyes.

The plot isn’t a subtle one – it’s a 400-odd page tug on the heartstrings – but there is so much more to this story than meets the eye. Moyes covers class, family, the right to live and die as one chooses, and what it means to love unselfishly. And in Lou, we finally have a properly relatable heroine – she hasn’t been dealt a privileged hand in life, when we meet her she is anything but exceptional, and her figure doesn’t defy the laws of biology. I’m off to buy the sequel (After You).

I followed Me Before You with the equally cheering Lover by Anna Raverat. I remember writing about Raverat’s debut novel Signs of Life when I first started this blog, and when I found out she was releasing a second book, I was overjoyed, as Signs of Life had completely haunted me, and I was desperate to see what Raverat did next. Lover tells the story of a marriage coming to an end, following the discovery of infidelity. It’s beautifully written and Raverat handles fairly miserable subject matter with lightness and gentle humour.

The release of My Favourite Faded Fantasy, Damien Rice’s third album, came eight years after his second and for the most part, passed me by. I don’t know how; I was completely obsessed with his debut O when it came out in 2002. I was surprised to find out that Fantasy is a Rick Rubin job – Rice goes into that decision a bit more here, in perhaps one of his most candid interviews ever (and even then, he doesn’t give that much away).

The album title track and ‘It Takes A Lot To Know A Man’ are classic tortured Rice, but both contain slinky little grooves, unmistakeable undertones of sex, which I’ve never associated with Rice’s work before. Normally he’s apologising to you, not trying to seduce you. ‘The Greatest Bastard‘ finds the tricky balance of being both brutal and beautiful – it’s one of the prettiest tracks on the album, despite its unflinching lyrics. ‘I Don’t Want To Change You‘ is lush and smooth, with mellow verses giving way to a heartbreaking chorus, chock-full of longing. But it’s ‘Colour Me In‘ that’s the real show-stopper – I can see this being a strong first-dance choice for couples everywhere for years to come (but hands off, I’ve called it now, you can’t have it). I didn’t notice the song during the first couple of plays of the album, but when I finally did, it genuinely stopped me in my tracks. His skill for writing beautiful, got-to-play-it-again melodies is unparalleled.

And now for the comic relief. This (from 9:27ish, and it’s worth watching at least the beginning of part two) has been giving DB and I huge amounts of amusement for the last couple of days. I wasn’t overjoyed when he first showed it to me, as he had a look on his face that seemed to say “HMMM, THIS IS ALL AWFULLY FAMILIAR,” but it is very, very funny.