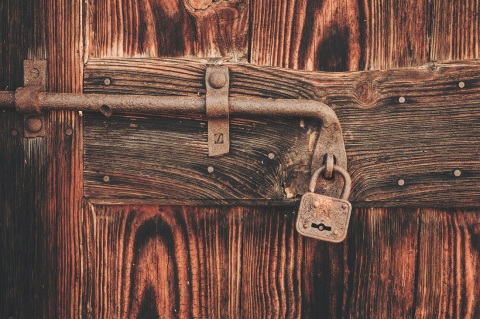 There are some mistakes in life you only make once or, if you’re particularly foolhardy, twice. Not backing up your three-quarters-written university assignment and then waking up on the morning you’re due to go home for Easter to find your laptop screen informing you “hard disk does not exist”. Not dashing for a post-sex wee and hours later weeping as the fiery pain of cystitis temporarily shreds your capacity for coherent thought. Neither you nor your partner checking that the door to his studio, home to various bits of musical equipment, has been properly locked before you both head to bed.

The Hound woke me up at 5am on Saturday morning, barking with an insistence I’d not heard in him before. Utterly baffled at his agitation, and trying to work out what was wrong – was he ill? Had he heard a fox outside? – I opened the back door and he dashed out. He leapt up onto our garden furniture and stood alert for a moment, eyes trained on the studio that sits at the back of our small garden. I hovered in the kitchen, still not fully awake, waiting for him to get whatever it was out of his system and come back in. Which he did, worryingly not much calmer. Tired and headachey from the generous amount of red wine consumed the night before, I shrugged at him and went back to bed.

As I pulled the duvet back over me, Drummer Boy leant across to look out the bedroom window. “Is the studio door… open?”

And it was. Black and gaping in the pre-dawn darkness. You know how in novels, people’s blood is forever running cold with fear? Turns out your blood can actually feel like it’s chilling in your veins. DB was up and out straight away, but in the few seconds it took him to reach the studio door, I had time to imagine him switching on the light to find the little room completely empty. PleaseGodnopleaseGodnopleaseGodno.

The light went on, and I saw him clap a hand over his mouth. Ohshitno. From my spot in our bedroom, I could make out some things still sitting in the studio. A floor tom. Some speakers. A cymbal stand, but with no cymbal on it. Fuck.

I went to the back door and called for him, panicking at the thought of the thieves still being close by, of them hurting Drummer Boy or The Hound. By this point, DB had gone round the side of the studio to the back fence, but I couldn’t see him. I called again into the darkness. “Come here!” he replied.

He’d found a snare drum and the cymbal abandoned by the fence. The fancy electronic sampling pad had gone, but by the looks of things, very little else. For some reason, it was at this point I lost it. “They would have taken your snare,” I said, helpfully bursting into tears. (Drummers are very particular about snare drums.)

We’re guessing – judging by the stuff left behind – that Noodle’s racket interrupted them pretty quickly and had it not been for him, we could have lost the lot. The very idea of which is unthinkable.

After reporting the theft to the police, we headed back to bed, shaken but relieved it hadn’t been worse. Everyone knows, theoretically, how awful it is to be burgled, but until it’s strange feet in your home or garden, strange hands opening your doors, strange eyes sizing up your belongings, you don’t fully understand the queasy horror of it. And we were relatively lucky. On Saturday night, when Drummer Boy was off gigging, I knew I had to check the lock on the studio door, but couldn’t walk the 20 feet without taking the dog, a torch, and several deep breaths.

When the cheery woman from the forensics team arrived to see if she could get any fingerprints, she took one look at Noodle and said “Mad Springer? They’re better than any burglar alarm.” Then told us how Springer spaniels are often used as sniffer dogs, but that their excitability often leads to them trampling over evidence. And as she was leaving, she observed, “yours is as nuts as a box of frogs, isn’t he?”

Yes, he is. But given the way he woke us up, and the losses he managed to spare us, he can be as mad as he likes. And I have no doubt that he will.

My darling @victorialegge and I needed cheering up today so we went to feast our eyes on the tulips at Hampton Court. It was dreamy
Went to an actual pub yesterday with @jbennison88 and it was glorious
Having a very productive Friday, thank you
“It all goes back to 1968 and the counterculture movement...”
Loading Comments...
Comment
×
%d bloggers like this: