Skip to content
June 10, 2018June 22, 2018 Posted in book recommendations, books, Lissie, music I love, podcasts, politics, things to do, Uncategorized, what to listen to

You’ll be pleased to know I’m down off my political soapbox for moment. Here’s what I’ve been reading and listening to over the last week or so…

This has been on my to-read list for months, as it was widely praised upon its release last year, and most of the writers I love have raved about it. So I was disappointed to find that I struggled with it. I think the failing is more mine than the author’s, as technically the book fulfils all my literary kinks (not-wholly-likeable female protagonist, illicit liaisons, insufferable middle-class creatives). And there’s no doubt that Rooney is an astonishingly accomplished writer; she can really turn a phrase. Maybe I’m jealous of her talents? She was born in ’91, so perhaps the problem is my ego. In any case, the second half of the novel was better than the first, as our narrator starts to experience some actual emotions, after priding herself on being something of an impartial observer. 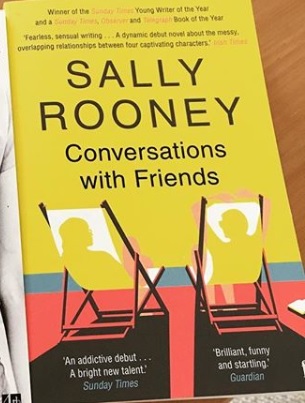 I will defend to my dying breath the rights of female characters to be difficult and mean and calculating, but if an author wants readers to come along for the ride, they need to evoke some empathy for creations that have shonky moral compasses. Or maybe I’m just too old for novels about troubled under-25s with relationship problems that are largely self-inflicted. Read if you like decent prose, but don’t bother if you’re more of a plot person.

And speaking of difficult female characters, Louise O’Neill could give masterclasses in writing them. Sarah, the unhappy protagonist of Almost Love, has a tough time of it. After growing up in a small town and losing her mother as a child, Sarah feels – perhaps understandably – that the world is against her. A talented but unfocused artist, she ends up teaching art at prestigious schools and having a joyless affair with a rich older man – Matthew. He is appalling and treats her as his sexual plaything, and she obsesses over him.

This is a painful read, short on relief, but a breathtaking examination of the madness of unrequited love. I read the whole thing on Friday evening and I’m not sure I’ve fully shaken off the sadness yet.

Sometimes I like to think that if one of my teenage dreams had come true (no, not the one about Billie Joe Armstrong), I might have ended up a bit like Lissie. Playing guitar, rarely being seen in anything more glamorous than jeans and a t-shirt, and writing melodic, emotion-driven tales of love and loss. Minor chords and windswept hair, you know the drill.

Except Castles is less standard female singer-songwriter fare, and more Lana Del Rey meets Kate Bush. It’s poppy and ethereal, sure, but Lissie’s incredible voice sets it apart from anything else bothering the charts at the moment. It’s a brilliant summer album – highlights are ‘Crazy Girl’, which has a real groove to it and would spawn a cracking dance remix if anyone felt like it, sassy ‘Love Blows’ (“and I am stuck at 17 when all the boys thought I was bossy and the girls could be so mean / It’s like I stopped growing”), and ‘Sand’ – “I cry my eyes out, grieve over you… I wonder if some day I’m gonna laugh about it”. What the girl doesn’t know about heartbreak clearly isn’t worth knowing.

But it’s not all doom and gloom. ‘Best Days’ is a Sheryl Crow-esque slice of sunshine (also, her look in the opening moments of the video is just #goals, quite frankly), while closing track ‘Meet Me In The Mystery’ is Lissie’s Kate Bush moment. Weird, spine-tingling, wonderful.

Some musicians know just how to cut you to the quick, don’t they? Like they’re writing for your ears only. And I’m perhaps biased because Drummer Boy has worked with her, but if there’s a songwriter out there who’s better than Ms Rogers at crafting songs about loving people you shouldn’t, then I’ll eat my hat (once I’ve wrestled it off the dog). As soon as I’d played this song for the first time, I played it again. And again. And again.

I Won’t Back Down – KT Tunstall, Mike McCready & Leah Julius

If you’re going to cover a swaggering ode to sticking to your guns and being true to yourself, you need to be sure you can bring something fresh to it. And I don’t know about you, but I think KT Tunstall et al. manage it with their cover of Tom Petty’s ‘I Won’t Back Down’.

I’ve had this pretty much on repeat this week – it’s an excellent remedy for a minor case of the blues – and I love the way the three musicians have brought a little tenderness to Petty’s anthem, while managing to retain its stadium-filling euphoria. And boy, does Tunstall know how to belt out a line. Truly, a track for our times.

However you feel about James O’Brien – and yes, he’s clever and right but gosh, he doesn’t half know it – you could do worse than listen to his podcast, Unfiltered. Specifically, the episode with rapper, writer and activist Akala. I know I’m late to the party on this one but I’m here now: Akala is one of the most intelligent, well-read and articulate people I’ve heard talk about politics in a really, really long time. His book Natives: Race and Class in the Ruins of Empire is the first thing I’m buying when June’s payday arrives because I could listen to him talk all day, so reading pages and pages of his words seems like the next best thing.

Other excellent guests on Unfiltered are: Russell Kane and Robert Webb. You won’t regret listening to either of those, I promise.

Finally: I know I’ve mentioned The Emma Guns Show a few times before, but a recent episode with nutritionist Ian Marber was so informative, reassuring and sensible that I’d feel bad if I didn’t share it.