Skip to content
November 11, 2018December 26, 2018 Posted in book recommendations, books, Caitlin Moran, feminism, John Niven, Kill Your Friends, make-up, Me Too, podcasts, things to do, Uncategorized, what to listen to

It took me two months to read At Home In The World – partly because I’ve had rather a lot on, and partly because, well, it doesn’t so much get under your skin as work its way into your blood vessels and scratch at you from the inside.

Joyce Maynard was trained to write like a journalist from an early age by her exceptionally clever, eccentric, rather troubled parents. At 18, she had an opinion piece published in the New York Times Magazine, which drew the attention of one J.D. Salinger, and they started a correspondence. She dropped out of college, moved in with him and they lived together as lovers for a year, despite a 30-odd year age difference. He ended the relationship abruptly, leaving a confused and devastated Maynard to rebuild her life. Which, to her credit, she did, establishing a career in journalism, marrying and having three children. But her relationship with Salinger became something of an albatross, and when this memoir was published in 1998, Maynard was accused of exploiting her connection to the famously reclusive Salinger for her own gains, and subsequently vilified.

You hardly need me to say it, do you? But two things: first, if this book were published now, its reception would be very different, and second: reading it in a post-Weinstein, post-Me-Too world, is… difficult. Like I said, it gets into you, and when you read about Salinger’s treatment of Maynard during their time together, your heart breaks over and over for the bright young woman being utterly manipulated by the powerful older man.

There’s a moment in the truly excellent Fleabag where, during a lecture on feminism, our protagonist and her sister raise their hands in answer to the question, “Who here would trade five years of their life for the so-called perfect body?” They are the only ones in the room to do so. And God, there’s so much truth in that moment. Because while I wouldn’t shave five years off my life to be a bit taller, a bit thinner, and to actually need to wear a bra, I’d seriously consider giving away maybe two or three years for perfect skin.

I’ve written before about the curse of acne, but in the video below, Jo Jones – beauty PR, Beauty Banks co-founder and my new woman-crush – talks incredibly articulately about having troublesome skin. In particular, she nails the impact it can have on your confidence. Yes, acne is essentially benign, but God, it isn’t half infuriating, in terms of the time it takes from you, and the mental energy you expend worrying about the state of your face on bad days. Put it this way: if I’m comfortable enough to not wear a scrap of make-up around you, I really fucking trust you.

And so to what’s saving my face right now: the matte version of the ubiquitous IT Cosmetics Your Skin But Better CC Cream – which is now available online at Boots, hurrah! – and Estee Lauder Double Wear Waterproof concealer. Between them, these disguise a multitude of sins, nights of sleeplessness, and a general lack of regard for one’s well-being. 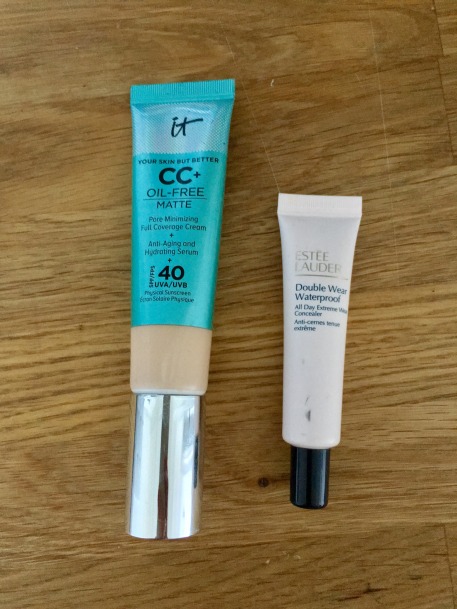 I always have to stifle a groan when I hear someone start a sentence with, “So I was listening to this podcast, and” – not because I hate podcasts, nor because I hate things other people like (though sometimes that is true. I mean, Ryan Gosling? Really? His face is so bland it makes me cross just looking at it. Give me a weird face on a chap any day. Like Tom Hardy. His face says it’s 50-50 as to whether he’ll fuck you or kill you and frankly, that’s my jam). There’s just so many podcasts – it’s impossible to find ones you love and have the time to listen to the ones your friends gush about. But if you’ll forgive me, I’m going to gush about How To Fail with Elizabeth Day, and in particular, the Alastair Campbell episode. Whatever you think of Campbell, there’s no two ways about it: this is a stonking listen. He is breathtakingly honest and open about his mental health but also refreshingly no-nonsense. His answer about that dodgy dossier feels frustratingly scant but it’s still interesting to hear how a political comms superstar reacts to a sensitive line of questioning.

Having finished the Joyce Maynard memoir, I needed something a bit more fun to read, so I’ve picked up the new John Niven book, Kill ‘Em All. We revisit A&R enfant terrible Steven Stelfox (protagonist of Kill Your Friends) in 2017 as he’s called in to save the career of pop star Lucius Du Pre – a very thinly disguised Michael Jackson. Given Jackson’s – sorry, Du Pre’s – horrific childhood and what it did to him, this book is a tough read in a different way. But I remain in awe of Niven, because he’s one of the few writers who can make truly vile characters who say appalling things seem fun. There’s always enough wit and humour to throw a bit of light on the dark stuff – and as the main plot takes place against a backdrop of Trump and Brexit, there’s a lot of darkness.

Niven’s appearance on The Fear podcast is a hoot – he talks about writing, his state of mind (for someone whose work frequently has me looking over my shoulder wondering if I’m allowed to read such filth in public, I was surprised to hear he generally feels pretty chipper), Twitter spats with J.K. Rowling, and the kitchen condiment that strikes fear into his heart.

These days, Twitter is a strange purgatory of outrage, flick-knife opinions and dog gifs, but it still provides moments of pure joy and loveliness from time to time. One such moment came a couple of weeks ago, when Caitlin Moran asked men to share the downsides to being a man. The responses varied from the relatively minor (limited range of clothing options) to the deeply sad (feeling unable to approach a lost child for fear of being accused of having sinister intentions). A lot of the replies were genuinely heartbreaking; all were touching in their own way. The conversation ended up lasting two or three days, prompting Moran to create a Facebook group so it could continue.

It’s funny, because prior to the Break-Up, I was convinced I was with the last good man on the planet. The idea of trying to find someone else filled me with horror – “I’ve had several years with a nerdy, bespectacled, cardigan-embracing, University Challenge-loving boy who, when drunk, explains why we should all be feminists, apologises to Germans for Brexit, and tells his friends to go down on their girlfriends more. Lightning never strikes in the same place twice!”

But it turns out, there’s plenty of men like this – lovely, kind, clever boys who just want to be nice. The last few years have seen men getting a pretty bad rap, and conversations like this – wherever they take place – are gorgeous reminders that the good eggs outnumber the bad ones, and that feminism is the thing that will free both women and men from the cold hard steel framework of the God-Damn Patriarchy and the bullshit it perpetuates.

The other Good Twitter Thing was this. Starts horrifically, ends up all OK. Dogs, man. Dogs.

“Being hit by a car and being released from hospital the next day?