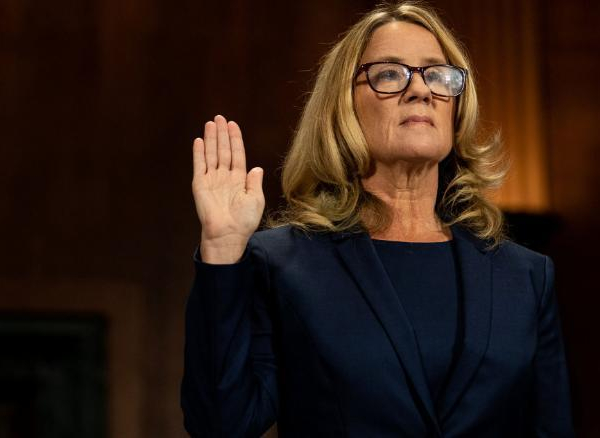 I recently had a conversation with an older female friend about Harvey Weinstein. “What I don’t get,” she said, “is why all the women that have made accusations in the last year or so didn’t say anything at the time”. Yes, this was recently. No, I didn’t roll my eyes and stalk off while muttering furiously to myself about patriarchy, collusion, and disgusting abuses of power. We had a reasonable chat about it, then moved on to happier discussions.

But then on Wednesday, just a few days after that exchange, it was reported that during a rape trial in Ireland, a female defence barrister had invited the jury to “look at the way [the complainant] was dressed. She was wearing a thong with a lace front”. Yes, this happened in 2018. No, I don’t have enough breath in me for the sigh of despair this remark deserves. (A rally to protest against victim-blaming is to be held this week in Cork, where the trial took place.) While of course I understand it’s a defence barrister’s job to cast doubt upon the complainant’s testimony, it’s exhausting to hear that in yet another rape trial, it’s the complainant’s behaviour being scrutinised more rigorously than that of the accused.

How are we still not getting it – that what someone is wearing during a sexual encounter has nothing to do with the consent they do or do not give? And furthermore, why are we so convinced that during such encounters, no-one’s allowed to change their mind? How is this still a grey area? Because to re-use a rather unpleasant analogy: sex isn’t a root canal. It’s not as if once you’re there, you have to see it through. Whatever happened in this particular case (and it must be noted that the trial did result in an acquittal), the complainant’s underwear is irrelevant, and the defence barrister’s comments should be called out for what they are: inflammatory, victim-blaming, and positively medieval.

The reason I point out that both the person I was chatting to and the defence barrister are female is not to point fingers or blame them personally, but to show that unchecked and unquestioned, the belief that women should behave in a certain way to ‘prevent’ being assaulted or raped takes root. It works its way into our heads – damaging all of us, women and men. We internalise it and, hardly noticing, perpetuate it.

Why do victims of rape and sexual assault often only speak up years later? Because look what happens when they do speak up. And because there’s no-one easier to silence than a scared woman.

Remember: the complainant in the Ched Evans case was named thousands of times on social media, forced to assume a new identity and move house five times. Ched Evans resumed his football career. Yes, he was acquitted – after a second trial – but he wasn’t wholly innocent.

And Christine Blasey Ford? The woman who testified courageously and articulately in front of America – no, in front of the world? She hasn’t been able to return to her job, she’s moved house four times, and she’s had to hire her own personal security. Brett Kavanaugh was sworn in as an Associate Justice of the Supreme Court barely ten days after the hearing.

Female victims can’t win. If they speak up straight away, their every move, utterance, garment is scrutinised – even their sexual history which, technically, can’t be used as evidence, but there are loopholes where it can be considered relevant. ‘What could you have done to prevent this?’ we ask. ‘What did you do to provoke it?’

But if you wait… If you take the clenching shame, the guttural fear, and hold it. Wait til it dies down, wait til either it shrinks or you grow big and strong and hard enough that it no longer skewers your insides every time you think of it – well. No-one believes you. Why are you speaking up now? Why didn’t you say something then? Maybe the trigger for you to say something was someone else’s story. A similar unfolding of events, the same name… It wasn’t just you. There is safety in numbers and two stories are better than one. Two voices are stronger than one. Telling the truth about rape and sexual assault is a fight, and it takes time to grow armour and gather your army.

So we have to keep talking. We must keep dragging those archaic myths (that women lie to ruin men’s lives, that dressed like that she was asking for it) out of the darkness, blowing the dust off them, holding them up to the light to examine their flaws. And we will. We will keep talking and sharing and telling you – until we’re out of words and air – our stories. Right now, it feels like we’re still chipping away, barely making progress, coming up against those calcified beliefs over and over again. Bad men plough on, their lives more or less unscathed, because power is like Velcro and sticks to itself. But there will come a time when the truth makes a difference. There simply must.

Because there’s nothing harder to silence than an army of angry women.

2 thoughts on “For shame”