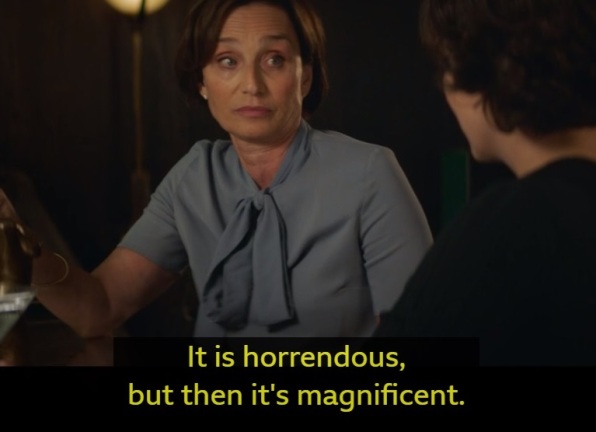 Sometimes, I want a fairy godmother. Not a magical one who’s going to turn the 29 bus into a horse-drawn carriage and my jeans and H&M t-shirt into a swishy frock – a real one. Part Jilly Cooper, part Polly from Peaky Blinders. Someone who’s lived a few different lives, inhabited a few different roles, someone with a strong look, whether it’s red lips and leopard print or Barbours and tweed. Someone who, when I’m crying on my sofa over a boy or am swimming in the depths of a hangover-induced existential crisis, will make me a strong Bloody Mary, light a cigarette, take a deep drag and say as she exhales, “fuck ’em, darling. You do you, OK? And fuck everyone else.”

I think every woman needs a fairy godmother.

The writing and performances in Fleabag have been making me gasp with awe every week for the last month, but the third episode, which aired last week and guest-starred Kristin Scott Thomas, kicked the whole thing up a notch. Playing Belinda, a successful businesswoman, Scott Thomas delivers a rant about womanhood and pain so powerful that I want it on the national curriculum. I want every male friend of mine to watch it now if they haven’t already, and I don’t want to hear from them until they’ve absorbed those words into their very bones. 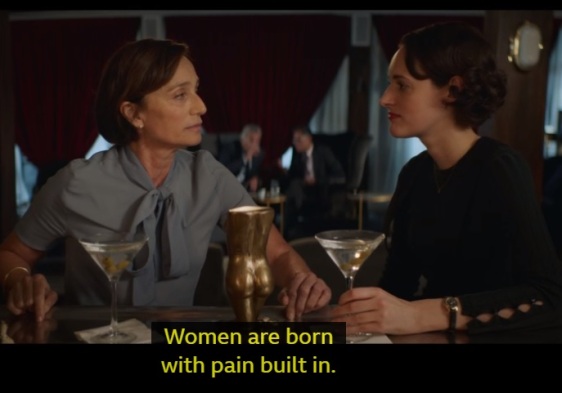 “Women are born with physical pain, men have to seek it out” is the general gist of the speech, and by sheer coincidence, I had a conversation with a friend about this very thing quite recently. His idea was that all the physical shit women have to go through makes them grow up faster than men; women are that much closer to the very stuff of life and death, the merciless tide of biology. Belinda’s monologue articulated something very similar – but ended with something remarkable, something I’ve never seen before:

“We have pain on a cycle for years and years and years, and then just when you feel you are making peace with it all, what happens? The menopause comes. The fucking menopause comes and it is the most… wonderful fucking thing in the world… then you’re free. No longer a slave, no longer a machine with parts. You’re just a person.”

I have never seen a woman onscreen say that when you’re no longer on a timetable dictated by hormones and pain and perceived fertility, that’s when life gets good. I have never heard the joy of that expressed before. To hear those words – that you’re free, to just be a person – was a revelatory moment.

Our social media timelines are full to bursting with incredible women in their twenties and thirties: writers, activists, artists in every creative field you care to name. It still feels like you have to get the bulk of your life’s glittering achievements in the bag by the time you’re 40. Scale the top rungs of the career ladder, meet the person you’re going to settle down with, and make sure you’re hot and sociable while you’re trying to construct a life that won’t fall down around your ears at the sight of one redundancy or unexpectedly large bill. And yes, there is more pressure on women, because having children impacts us the most. And if we do decide to have kids, we have to factor that seismic impact into our plans – however vague our plans may be.

You really cannot be what you cannot see, so the idea that all the excitement needs to happen in your twenties and thirties won’t loosen its grip on us until we see more of women’s ‘third act’ in pop culture. And it is older women we need to see more of, make no mistake. When Mick Jagger’s heralded as a hero for prancing around like a Quentin Blake drawing of himself at the age of 75 and Madonna is told to “put it away and act your age, love”, it’s the older women we need to clamour for. The now-famous Last Fuckable Day sketch illustrated how ageism against female actors plays out in Hollywood, and in Wednesday’s Times, film-maker Carol Morley was quoted as saying: “if you put a 58-year-old woman like Patricia Clarkson in your film, that becomes a problem. It’s a problem for pre-sales. It’s a problem for magazine covers. It’s an economic thing. And unless we shift that, communally, it’s going to be very hard to finance any film outside of the expectation of what sells.”

So back to that Fleabag scene. Our heroine, somewhat nonplussed, responds to Belinda’s speech with, “I thought [the menopause] was horrendous?”

“Oh, it is horrendous,” comes the reply. “But then it’s magnificent.”

Because maybe that’s when you can just be. The pressure is off – you don’t have as many questions to answer. All the “should I do this?” and “what if I do this?” is gone – because you either have or you haven’t. You’ve lived through some stuff, felt your heart break then knit itself together, somehow both stronger and more tender. It’s dawned on you that this impossibly short life goes on, and kindness and love and being friends with yourself are what’s important, not other people’s expectations. I was glad to see this articulated on Twitter a few weeks back:

I follow a lot of fantastic older women on here who are strong, hilarious, self-assured and seemingly out of f*cks to give. One really annoying thing about being a woman, i think, is that it takes so many trials and tribulations and putting up with years of nonsense to get to it

And that’s the thing, isn’t it? What you have to go through to get there – the anxieties, the uncertainties, the fucking-it-up, the darkness – those things aren’t the roadblocks, they’re the road. Until very recently, we struggled to find versions of the older woman that we recognised and could relate to. But with one perfect monologue, Fleabag has given us hope. Representation matters – there is so much to be scared of when you identify as a woman, and we should be showing girls that growing older is a joy, not something to fear. That youth is not the only accepted currency.

When you don’t have youth, you can have magnificence.

One thought on “But then it’s magnificent…”