Skip to content
April 5, 2019April 5, 2019 Posted in bit of a rant, catcalling, essential life advice, life and whatnot, Uncategorized 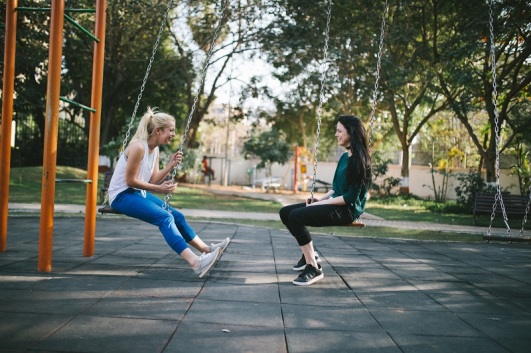 The older I get (she says, at the grand old age of not-yet-thirty), the more I believe in the importance of compliments. Both paying them, and accepting them with grace and good manners. The latter isn’t always an easy thing to do, and the former should be always done judiciously, but life is short so we should tell people what we like about them.

As middle-aged white male comedians* like to conclude after wailing, “women, just tell us what you want! Stop the hinting and say what you mean”: none of us are mind-readers. If you think someone is great, or you love something they’ve done or their outfit or whatever – they won’t know unless you tell them.

*as they conveniently forget or ignore the fact that for thousands of years women weren’t allowed to want things, and when they finally were allowed, they had to voice it in a way that prevented men from thinking any power whatsoever had been conceded – wait, where was I? Oh yes…

If you know me personally, you’ll know that back in February, singer/songwriter Thea Gilmore DM’d me on Twitter to say she’d read and appreciated this blog post of mine (I don’t actually know how she found it, because she doesn’t follow me). Reader, when I received this message, I didn’t know whether to cry with joy, faint, or throw up: 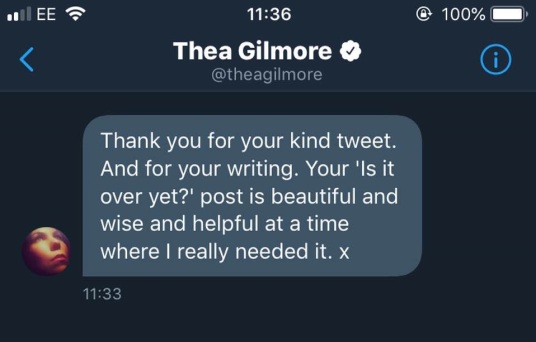 I discovered Gilmore’s music when I was 13. And in your teen years, you are made porous and impressible by hormones, so the music you fall in love with works its way into your DNA. Last summer, I revisited one of Gilmore’s albums that I hadn’t played in its entirety since I was about fifteen, and the Proustian rush it sparked gave me whiplash. I’d never heard lyrics like hers – lyrics that can stand alone as poetry – and finding this artist that no-one else I knew had heard of was like discovering a secret garden. And as always, when you find yourself a hero or inspiration, it feels like permission to be yourself.

So imagine how I felt when one of my longest-held writing heroes told me something I wrote was meaningful to her. I… lost my shit. If nothing else good happens in 2019, it will be the year Thea Gilmore told me she liked something I wrote.

Telling creatives when their work means something to you is something we all need to do more of. Because when you read their words, see their paintings, laugh at their jokes or hear their melodies – well, that’s the stuff of their brains and hearts you’re consuming. Their own personal sorrows and joys have fuelled their output. Not to mention the fact that all Creative Types are needy and insecure and with self-worth that’s wholly dependent on people telling them they’re good at what they do. To paraphrase a comedian I saw recently: “I don’t do this job because I’m a happy, well-adjusted person!”

And then there’s the superficial stuff. One of the only useful things I’ve ever gleaned from procrastinating on AskReddit is that a lot of men feel they don’t get many compliments on their physical appearance. Broadly speaking, women are very good at complimenting each other’s looks and style – comments like, “I love your dress”, “that lipstick’s amazing on you” and “you look stunning!” fall out of our mouths almost every time we see our friends. And when we mention something we don’t like about ourselves – “fat” thighs or stomachs that are less than drumhead-taut – we’ve barely finished the sentence before our friends are saying things like, “Babe, are you mad? When you turn sideways, you disappear!” Men don’t seem compliment each other quite as readily as women do, and guys, honestly, please try it. Tell your mate he’s wearing a good shirt or that his hair’s looking great today or his new glasses suit him – because there’s nothing like the warm glow of an unasked-for, unnecessary compliment to lift the spirits.

That said, it’s also true that comments on physical appearance, however positive, should be deployed with caution. Context is everything. Most women have spent a lifetime hearing men comment on their physical appearance; we don’t always welcome it. We can be fairly sure compliments from our girlfriends come from a genuine place; from men, it’s harder to tell. Every woman you know has been catcalled in a weird situation. It’s happened to me when I’ve been out running, for God’s sake – sweating profusely and red as a cherry. Having some bloke shout from a passing car isn’t a compliment; it’s a comment on my appearance I didn’t want, and an interaction I did nothing to invite.

And compliments in the bedroom are undoubtedly dicey – after six months of dating I’ve concluded there are no good words for sex that can be used in casual conversation. Everything’s either far too anatomical, onomatopoeic or just utterly cringe-worthy. But in romantic situations, a dalliance without a bit of mutual complimenting is curiously bloodless. A whispered, “God, you’re hot” will always go a long, long way.

It’s also worth remembering that you can pay someone a heartfelt compliment, but they do not have to believe you. Yes, it’s a churlish, joyless soul who’ll outright dismiss a comment like, “your hair looks great!” but true self-esteem cannot be changed by what other people tell you. Don’t take it personally if someone rejects your kind words. Some people feel strange when they receive compliment on their looks – if you’re insecure about your face and/or body, it can be quite hard to parse being told you’re attractive. And if you’re struggling with a specific body issue, it’s sometimes jarring to have to hold someone else’s opinion in your head alongside your own.

Some days, our perceived physical flaws paralyse us. Articulating that isn’t always fishing for reassurance; sometimes we need to say “I feel bad about my thighs because of society’s stupid beauty standards” and just be heard, not told we’re wrong.

The best compliments will always be on what you can do, not what you look like. Tell people you love the stuff of their brains and hearts, and you’ll not go wrong.

One thought on “With compliments…”