Oh, this was a riot. Sheer joy that took me less than 48 hours to devour. It’s essentially a fictionalised version of how Fleetwood Mac made Rumours – 1970s’ California, a wildly successful rock band, all the drink, drugs and drama you’d expect, and at the heart of it, two singers who bring out both the worst and the best in each other. Actually, not quite.

Because while there are many striking things about this novel – its oral history style, its lush, evocative prose, the sheer fun of its setting – the most striking thing of all is the strength of its female characters. The most important figure in this book is not who you think it will be – they’re not in the band at all. I love what Jenkins Reid has done here: you’d expect a novel set in the music industry during the ’70s to have female characters pushed into the background and very much at the mercy of the men in the story. But not here. I was lucky enough to see Jenkins Reid in Hove on her book tour, and when discussing representation of women in fiction, she said: “My friends who are stay-at-home mums do not see themselves in pop culture. I wrote this for them”.

Come for the rock stars, stay for the sheer giddy joy of seeing well-written women running the show.

I adored the source novel for this play when I read it a few years ago, and was therefore intrigued to see how it would take to being adapted for the stage. Happily, I thought it was beautifully done. Downton Abbey‘s Joanne Froggatt was well-cast as put-upon newspaper arts desk assistant Frances, who slowly blossoms from wallflower to gilded lily, shamelessly exploiting a tragedy to improve her own circumstances. The transformation isn’t wildly subtle; when we meet Frances, she’s in trousers, boots and an anorak, hair scraped back and pale-faced, but when we leave her, she’s in a dress, wedge heels and lipstick. But the changes happened gradually enough to seem unforced. Sylvestra Le Touzel was a hoot as Frances’s posh, potty-mouthed boss Mary, and Leah Gayer stole every scene she was in, playing privileged drama student Polly. Whip-smart pop culture references cut through the tension but it was Frances’s story that gripped me – her dark, glittering determination to get what she wants is mesmerising.

All the reviews of this described it as “erotic” and “daring”, but actually, I found it fairly oppressive. Beautifully written, but something of an ordeal to read – there was very little happiness to be found here. I had to tackle it in small doses because it’s one of those novels that has a contagious sort of mood: you find yourself in a gloom but you don’t know why, and then you realise it’s because of the bloody book. Don’t get me wrong; the prose is gorgeous, and I wouldn’t hesitate to read more of Slimani’s work. Adele reminds me very much of Hausfrau, which put me in a grey-blue funk for days, so I can’t recommend it with a clear conscience. Only read if you’re feeling particularly robust.

This is a deftly-executed comedy about a modern couple living an idealised 1950s’ existence – he goes off to work, she greets him at the door with a cocktail each evening – and it has left me utterly in awe of Laura Wade’s talent. Katherine Parkinson is brilliant as blinkered, vintage-dress-clad Judy, and we watch the couple’s relationship unravel as maintaining a facade of domestic bliss becomes harder and harder. The killer moments come in the second half – Judy’s mother delivers a speech about feminism and misguided nostalgia so fucking potent I nearly grabbed my friend’s hand, and the couple’s male friend, accused of inappropriate behaviour at work, talks himself into a hole so uncomfortably you feel your insides contracting. Like its exquisite pastel-coloured set, Home, I’m Darling looks all fun and games, but you don’t have to wait long for the deep flaws to reveal themselves. It hits so many touchpoints we’re currently grappling with: equality, the unpaid labour done mostly by women, and the toxicity of nostalgia (Brexit, anyone?). GO AND SEE IT BEFORE IT CLOSES ON SATURDAY 13TH APRIL.

How To Be A Person In The World, Heather Havrilesky

I started this on Saturday, finished it on Monday evening and I think it might already have changed my life. Havrilesky writes the weekly Ask Polly column for The Cut and it’s the only agony aunt column I will ever take remotely seriously. 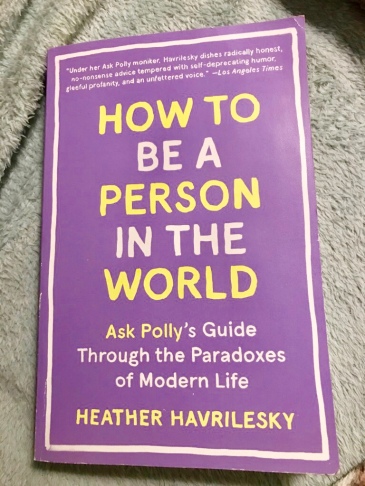 Many of the problems she responds to are of the ‘first world’ variety – often young women hitting periods of dramatic change and transition; break-ups, career doubts, the usual – but that renders them relatable rather than meaningless. And her responses – oh, God. Her writing is so warm, inviting, generous and full of heart that I’ve cried or nearly cried with the turn of every page. If you can’t afford therapy, get this book. She sees through excuses and partial explanations right to the centre of every single problem, and so many times the answer is: give yourself a break, accept yourself, treat yourself with the love and kindness you’d show a friend or partner. It’s easy to type, but not easy to do, and Havrilesky’s writing makes it abundantly clear that she knows how hard it is, and she’s rooting for us every step of the way.