Skip to content
February 21, 2020February 22, 2020 Posted in life and whatnot, Uncategorized, whimsy 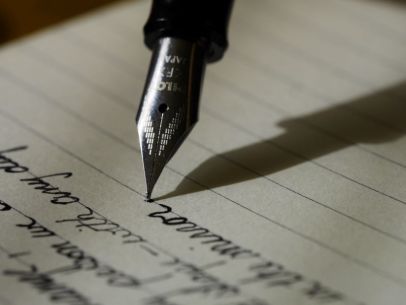 I love a linguistic earworm. Lines and phrases that aren’t necessarily poetic in themselves, but are delivered in such a way that they ring in your head long after they’ve been uttered, and embed themselves into the folds of your brain for all eternity.

Comedy is great for this – in fact, I’d venture that crafting such lines is one of the main aims of comedy in the first place. I must confess to fighting the urge to say, “it’s as Ann as the nose on Plain’s face!” from Arrested Development on average once a week. Ditto “this isn’t Waterstones”, as hissed gleefully by Simon Pegg’s horrible bookshop manager in the opening episode of Black Books’ final series.

But there are other sources for these resounding remarks, these words that echo on for lifetimes. Family in-jokes. Throwaway comments from lovers and friends. Books, songs, articles. Sentences that etch themselves into you, become part of your emotional fabric, and almost unacknowledged, demonstrate the nuclear power of mere words.

I adored this piece, and I’d barely got to the end of it before I started compiling my own list. Tell me yours, when you have a moment.

“Put your body where your mind is.”

I read this strange little novel by Gillian Cross, author of the Demon Headmaster stories, when I was about ten or eleven, and it has never left me. Sometimes I cannot fathom why, and sometimes, I think about the plot for five seconds and it could not be more obvious: it’s about a wilful, unlikeable girl (bingo) who joins a band (bingo) and forms a very strange relationship with the other singer that’s half-attraction, half-loathing. It’s literally everything I want in both life and art: music, rage, and levels of sexual tension that could power Las Vegas for six months.

Anyway, “put your body where your mind is” is a lyric from one of the band’s songs, and I think the reason it’s wormed its way into the deepest recesses of my brain is because my body and mind are very rarely in the same place.

“You can’t be doctor and patient!”

One from Granny, and good grief, it’s one of the greatest lessons I’ve yet to learn.

I have always been good at seeing both sides of an argument – I have many flaws but I do not lack a sense of fairness – but this does mean I’m inclined to assume I have all the answers, and that if I just think hard enough, I can solve things. Like lots of people, I loathe asking for help and would rather die than ask someone for something they’re unable to give. The problem is, if you don’t actually ask, you don’t know they can’t give it. You’re just assuming. You’re being the doctor when sometimes it’s OK to just be the patient.

Sometimes it’s OK to just ask. To just want or need something. Or so I’m told, anyway.

Let’s face it, most teenagers are idiots, so 17-year-old girls should take everything said by 17-year-old boys with fistfuls of salt and plenty of eye-rolling. But when someone who claims to be your friend states something with confidence, you believe them. Why would they lie? At 17, you don’t know yet that most people are riddled with insecurities – that growing up is largely a process of accepting your own flaws and forgiving other people for theirs.

And so when your friend tells you you’re probably a bit too weird for that baby-faced rugby player you keep gazing at, you assume they must be correct. But the other thing about teenagers is that their skin is a porous film, and their hearts sit close to the surface. You tell them something with enough conviction, they absorb it, straight down to the bone. You are too weird to attract the person you’re attracted to, you will never quite deserve the things you want. You stay here, on the sidelines. Best not chance your heart.

Four years later. You’re flirting with a different friend, but you know that when he flirts back, it’s just because flirting is fun; it is nothing to do with you personally. For reasons you now cannot recall, you tell him about that “bit niche” remark.

“That’s a horrible thing to say to someone,” he says. And for the first time, you wonder if it might be. You spend seven years with that man; he is many things but his kindness is never in doubt.

And when you move on and start to date other people, the words that ring in your head are: “probably a bit niche for this one”.

“There’s nothing wrong with my ear!”

Once, when my brother was tiny, he misheard my mum saying “he’s got diarrhoea” (why she was announcing the poor child’s misfortune to the rest of the family is anyone’s guess). Tiny Brother piped up, “there’s nothing wrong with my ear!”

I will bring this up at his wedding. It makes me laugh every single time I think of it.

I love the sheer skewering accuracy of this phrase, and hate its casual misogyny, but fortunately it comes out of the mouth of a fictional character.

“Stealth moose” is used by an odious posh boy in Claire Lowdon’s Left of the Bang to describe a woman who looks attractive from a distance but up close, is not. It’s a catchy term that nails a particularly laddish way of talking about women, then hammers it home. Vile genius that cuts to the quick. I use it jokingly on low self-esteem days (which, for reference, are all those that end in ‘y’) – “ugh, I feel like a right Stealth Moose” but there’s real fear at the heart of the self-deprecation.

And I don’t write this to fish for compliments – I know we’re all insecure about how we look, and I know we all wish society cared less about physical beauty. I also know that attraction is a marvellously inclusive, individual thing that has very little concrete connection to the beauty ideals we’re sold.

But I also feel the difference between how I’d describe myself if you couldn’t see me – blonde, small, blue-eyed – and my actual physical self very keenly. Stealth Moose: it kills me, because it describes the gap between what others see of you, and everything you are.

“These days, I do whatever the fuck I like, at all times.”

You already know that I’ve never read an Ask Polly I didn’t find useful in some way, and I’ve screenshotted more paragraphs of Heather Havrilesky’s writing than I care to count. But this is one of those lines I hear in my head the most. Because: imagine. Imagine feeling like you deserve good things. Imagine living that honestly – and being OK with doing so! Not being scared – of failing, of rejection, of what other people think of you. Because sometimes I think my real problem (and perhaps yours, too) is not that I’m scared of doing exactly what I want to do – it’s that I’m scared I won’t cope when things don’t work out. That failure and rejection will crush me irreparably, rather than temporarily.

I don’t think this line is about being an arsehole, or shirking your unavoidable responsibilities, or even indulging yourself at the expense of healthy choices – even though that’s the most obvious reading. No, I think this line is about knowing what’s good for you. Knowing what nourishes you – what stokes the fire in your soul and keeps your blood fizzing and your mind hungry. And knowing that you’re in control of finding those things.