The main thing my genuinely one-in-a-million grandmother taught me – apart from “never go to bed on an argument” and “it isn’t wise to leave the remains of a beef joint in the bottom oven of an Aga for a fortnight” – was the importance of going for a nice long walk. Actually, she never said it had to be long. Just a walk – one foot in front of the other, fresh air, a dog if you’ve got one, and some wellies, because even grown-ups need to splash about in puddles and kick autumn-crisp leaves and relish the squelch and splatter of mud.

I can’t stay in the house all day, unless I’m properly ill. Rainy weekends are torture for me if I have nothing planned. Cabin fever sets in within a couple of hours -an itchy, cross feeling – and only getting outside will ease it. I’m baffled as to how I made it through an English degree and Linguistics Masters, what with all the “sitting down inside” that they involved, and it partly explains why I’m not a freelance writer now (the other parts are “cowardice” and “I had to move out of my parents’ house, so pursuing a creative career wasn’t an option”). As soon as I get outside though, the calm is almost instant. It doesn’t matter if I don’t really have anywhere to go; simply moving in a direction is enough to still the angst. The sound of my feet on the pavement, steady as a heartbeat. Legs moving like bone clockwork. The ticker-tape of anxious thoughts slowing from a frantic buzz to a manageable pace.

I miss being able to walk to work. Eight hours a day at a desk means that those half-hours of fresh air each side are utterly invaluable. Sitting on a train doesn’t cut it, even though my journey through the Sussex countryside isn’t half bad, as commutes go. Pounding the pavements at 8 in the morning is an excellent wake-up call, and stepping out into brisk, dusky evenings is a great way to shake off the office cobwebs. I firmly believe in walking at a pace that suggests you’re marching into battle, or are the ruler of a small country, or simply have some serious shit to fuck up. Walk to work like you’re a Liam Neeson character and you won’t go far wrong.

You can be well and truly holed up in the doldrums (whatever they are) and find yourself soothed by a walk. It doesn’t matter where you go – town centre, seaside promenade, green fields, fairytale woodland – they will all, in their different ways, remind you that there are so many worlds ticking along outside your head. People with far bigger problems than yours.  Or if that doesn’t help – because really, who has ever been cheered up by the words “it could be worse”? – you notice the tiny moments of everyday joy. Elderly couples walking arm in arm. Small children wobbling along, tiny hands held by proud parents. Dogs chasing each other round parks. Cats lying in inconvenient spots, trying to catch a bit of sun.

When everything gets a bit much, the first thing to do is to take a walk. It’s a good reminder that everything – every book, every cathedral, every journey – starts with a word, a brick, a step. 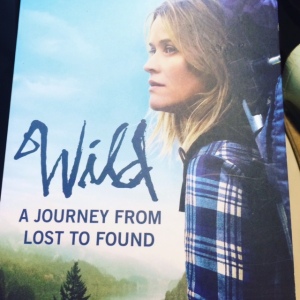 I have a habit of shunning popular things until the fuss has died down, and true to form, it was only last week that I finally got around to reading Wild. And pretty much downed it in one.

After watching her mother quickly decline and pass away following a diagnosis of lung cancer, Cheryl Strayed’s life starts to fall apart (understandably). To get back to herself, as she puts it, she decides to walk an 1,100-mile hike along the PCT (Pacific Crest Trail) – alone. Armed with a huge, over-stuffed backpack, little to no hiking experience, and a metric fucktonne of determination, she puts one foot in front of the other for roughly three months. Wild is Strayed’s account of the journey, and of the events that led her to it. “Woman goes on long walk” isn’t necessarily the most promising of premises, but by God, what a book Wild turned out to be, and what a woman Cheryl Strayed is. Emotional but never mawkish (I mean, there’s a bit that had me visibly sobbing on a crowded train, but that’s just me), inspiring but never contrived, I’d seriously recommend this if you’re stuck for something to read. It’ll really make you think twice about doubting yourself, too.

We went to see Chvrches the other night, and they were fantastic. Their support act, Sydney-based Mansionair, were also nothing short of remarkable – their dreamy electro-pop was the perfect start to the evening and the soaring vocals provided by frontman Lachlan reminded me a little of Jeff Buckley. Try not to fall hopelessly in love with this, won’t you?