I have a bizarrely intense attachment to things that are handwritten. Actually, maybe it’s not bizarre at all, given that I write words for a living. On Valentine’s Day last year, upon finding out Drummer Boy hadn’t got me a card, I thrust some scrap paper and a Biro into his hand and told him to write something – anything. I feel bad – it’s dreadfully, predictably girly to care so much about cards. Cards are annoying; you get them, you have to find space for them, they sit on your mantlepiece/windowsill for a while and then they end up in the recycling. And it’s hardly fair, is it? A professional writer whose bread and butter depends on her ability to conjure half-decent copy out of thin air demanding heartfelt, eloquent prose from someone who doesn’t find it quite as easy. I’m a monster, I really am. 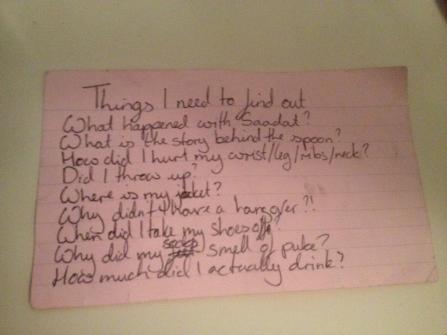 Three or four years ago, I found the above note on a train. It amused and intrigued me so much that I kept it. I love the idea of a girl spending the day after a mad party trying to piece together what happened and with who, and deciding to write a list to corral her scattered thoughts. We’ve all been there – spending most of a day reeling from excessive alcohol intake and poor choices.

Recently, I was toying with the idea of keeping a diary again. A proper Bridget-Jones-style notebook where I write down what’s happening and how I feel about it, with a pen. My main motivation for it would be knowing that in ten, twenty years time, I could re-read my entries and laugh/cringe/boggle. There is a romance to writing your feelings down; I think perhaps you engage with your emotions on a different level when you put them down in black and white, ink on paper. Sure, I have the blog, but it’s an edited version of me. Kind of. Unedited thoughts are far more interesting – and for the thinker’s eyes only.

When it comes to writing to other people, I have a similar theory – we connect more deeply with words we handwrite than words we type. It’s so easy to type a message to someone – on a phone, a tablet or laptop, on Facebook Messenger, WhatsApp or iMessage. Writing a letter immediately involves more thought – you need blank paper or a pretty card, a pen that won’t leak or smudge, an envelope, a stamp, or you need to live near the person so you can drop it through their letterbox. To handwrite something to someone, you have to really want them to see it, I think.

And so to this year’s Valentine’s Day.

I’d noticed the guy a few weeks ago – he gets on my bus a couple of times a week, but never with any regularity. He has the kind of face that is guaranteed to make me look twice – cheekbones you could cut yourself on if you weren’t careful, and a posh-boy look that suggests his education was expensive and his knowledge of rugby and cricket is sound. (I have no idea if he went to private school and he may well not know the first thing about line-outs and being silly mid-on, it’s just his face suggests otherwise.) So I sneaked a glance or two, just casually – it’s important to have a bit of eye-candy on your commute, it really is. He may have noticed me noticing him once or twice, but I couldn’t be sure.

He got on the bus on Tuesday, and there was a momentary meeting of eyes, a fleeting smile. He went and sat somewhere behind me, and I turned my attention back to The Growing Pains of Adrian Mole. Teenage melodrama is much funnier when you’re a good few years past your own teenage-hood. Suddenly, Bus Guy appeared in front of me, about to alight. “I just wanted to give you this,” he said, then headed down the stairs without a backwards glance.

“This” was a slip of lined paper, well-folded.

“I hope you don’t think this is too presumptuous of me, but I feel like we’ve been smiling at each other each time I get this bus, and it’s Valentine’s Day, so I thought I’d throw caution to the wind. Here’s my number – it would be nice to get to know you better. Happy Valentine’s Day.”

There is something delightfully old-fashioned and romantic about writing someone a note. It’s both bold and reserved at the same time. It manages to be impulsive and thoughtful – being brave enough to make contact with that person you find attractive, while leaving the power very much with them. He could have come over and spoken to me, but if I’d been freaked out by that, I would have been trapped in the conversation until he left. So a handwritten note is the classiest of moves. Other men: take note. As it were.

He’s not got on my bus since then.

This song is a) incredibly fitting, and b) the first new track from Michelle Branch to actually be released in God-knows-how-long. I for one am ecstatic to see her again.